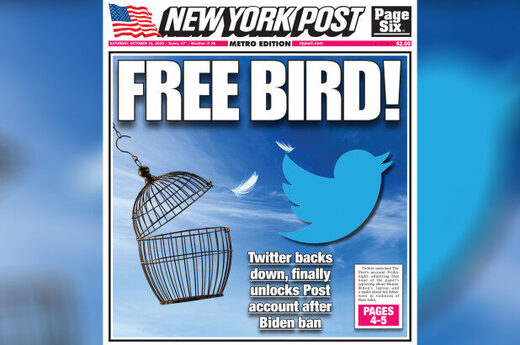 The move came after The Post refused Twitter’s demand that it delete six tweets that linked to stories that the company claimed — without any evidence — were based on hacked information.

In a series of tweets, the social-media giant said it was revising its “Hacked Materials Policy” and “updating our practice of not retroactively overturning prior enforcement.”

“Our policies are living documents,” said one of the tweets from @TwitterSafety.

“We’re willing to update and adjust them when we encounter new scenarios or receive important feedback from the public.”

The Post immediately celebrated the victory with a tweet declaring “We’re baaaaaaack” and an image of the tabloid’s Saturday front page, with the headline “FREE BIRD!”

The message quickly went viral, racking up more than 17,000 retweets and close to 50,000 likes in about an hour.

The company claimed The Post violated a policy on sharing “hacked materials” by tweeting links to bombshell exclusives on Biden’s emails — without ever saying how it came to that conclusion and despite the fact that neither Hunter Biden or anyone else has claimed his emails were hacked.

But it continued to hold The Post’s account hostage — demanding the six tweets about its own reporting be deleted. They never were.

Twitter also made the six tweets at issue invisible to users by replacing them with messages saying, “This Tweet is no longer available.”

On Friday, the company said that under its latest policy revision, “Decisions made under policies that are subsequently changed & published can now be appealed if the account at issue is a driver of that change.”

“We believe this is fair and appropriate,” Twitter said.

News Corp called the move, “an important moment for journalism and for the freedom of the press.”

“There is no evidence whatsoever that the documents are not authentic, and the arbitrary blocking of the Post was a significant moment during a critical time in this election season. It also had a negative commercial impact, but the Post team was determined that principle should prevail and it has.

“Alexander Hamilton, the paper’s founder, looks down tonight with a broad smile and a sense of pride,” said Chief Communications Officer Jim Kennedy.

The Post gained about 190,000 followers while it was locked out of its account, a 10.6 percent increase in just about two weeks.

That compared to a drop of just 1.2 percent for the S&P 500 Index, which Twitter joined in 2018 when it replaced Monsanto, which was acquired by Bayer.

The company’s abrupt about-face regarding The Post and its grueling treatment by Wall Street traders followed Twitter CEO Jack Dorsey’s problematic appearance before the Senate Commerce, Science and Transportation Committee on Wednesday.

But a spokeswoman for President Trump’s campaign quickly posted a video that showed she was prevented from tweeting an Oct. 15 Post report about a 2017 business plan involving Hunter Biden in which 10 percent of a new company would be “held by H for the big guy?”

The ban on that story was lifted about two hours after Dorsey’s remark, with Twitter claiming it was the result of a technical glitch.