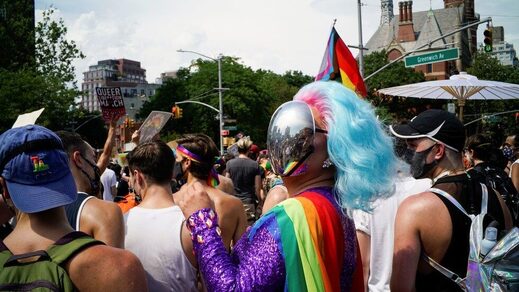 The social engineering around new terms to describe ourselves are baffling & unnecessary. Why are charities, multinationals & broadcasters like the BBC so keen to push this agenda and brainwash our children?

Language is not only the medium of our speech, but the medium of our thoughts, so when people set out to change our language, we are right to be concerned. Unshackled by anything equivalent to the Académie Française, which regulates the French language, English develops in response to usage. But we would be naïve to imagine that all change is passive when vested interests are keen to change the way we think.

In recent years, gender has been quietly replacing sex in language and policy across the English-speaking world. But the changes are not stopping there. While the transgender lobby has shrieked their mantra, trans women are women, the group formerly known as women are having words ripped from them, even by their own support organisations. The coordination is uncanny.

Earlier this month, Sands UK, a British charity that works with pregnant women who lose their unborn children, decided that “birthing parent” might be suitable language to use for the grieving mothers they support.

They knew it was controversial; they disabled replies. Meanwhile in Canada, Femcare – “a global leader in menstrual policy entrepreneurship” – redefined women as menstruators, though they couldn’t quite keep up the newspeak and reverted to more traditional language midway through the sentence.

But these charities are merely following in the footsteps of multinational corporations like Proctor and Gamble whose Tampax products are marketed worldwide. Apparently busting myths, they dissociated the word woman from the female sex, leaving them with the designation of “people who bleed.”

But at least women – adult human females – have prior knowledge to fall back on. Children do not. Messages they receive may go further than changing the way they think; they may establish ways of thinking in ways alien to their parents.

Worryingly, even the BBC – a state broadcaster – is involved, using its Bitesize platform that supports children with their schoolwork. But it’s unclear where their article on being “an ally to friends who’ve changed their pronouns” might fit into the curriculum. With help from LGBT advocacy group Stonewall UK, they appealed to kindness, to the natural desire of children to feel that their friends are accepted, comfortable and included.

The message is revolutionary: Pronouns should not be chosen by the observer on the evidence of what they see, but imposed by the subject on the basis of how they claim to feel about themselves. This is a massive leap from how we used to use pronouns (and most adults probably still do). They cease to describe material reality, and instead label identities. Why is the BBC doing this to our children? They move far beyond the familiar ‘he’ and ‘she’, or even ‘they’ – a pronoun that has long been used for someone whose sex may not be known. Without irony, the BBC introduced what they called “neo-pronouns,” such as:

They polished off their list with pronouns known as ‘Spivak’ (ey/em/eir). If this means anything to anyone, please do let me know. I may be trans but I have no secret knowledge that explains the purpose or need for these labels. But at 52 years old, I may be forgiven for oldthink. Children constructing their cognition on these labels will think differently about society. Because where there are labels, there are people to be labelled.

Maybe the most worrying aspect of the whole article is the invitation to every child reading it: “Perhaps you’d like to share your own pronouns as well when making a new friend, or normalise putting your pronouns on your own social media profiles. This way your friends who use neo-pronouns will know you’re a safe space to share with.”

We can only speculate how many children will choose something more interesting than ‘he’ or ‘she’.

This is more than being ‘kind’: It is social engineering and its promoters include NGOs, large corporations and state broadcasters. Something very odd is going on and it is unclear why.

Perhaps clues lie in the ‘Dentons document‘ that was uncovered last year by Roll on Friday, a British website serving legal professionals. This 65-page document was a joint effort between Dentons, the global law firm, the Thomson Reuters Foundation, and the LGBTQI pressure group IGLYO.

It’s a fascinating read. But while it might not give the answers, it catalogues in meticulous detail the methods that non-governmental agencies should use to effect societal change. Notably, campaigners are warned to “avoid excessive press coverage and exposure,” because the “general public is not well informed about trans issues, and therefore misinterpretation can arise.”

The report takes as its basis the assumption that everyone has a ‘gender identity’, despite the fact that the term cannot be defined without recourse to circular reasoning and reference to sexist stereotypes. But the report goes further and prioritises gender identity, which should be affirmed and legally recognised quickly and without impediment, based purely on how the individual claims to feel about themselves. Age is no barrier.

In the minds of the authors, “The right to legal gender recognition is crucial for young trans persons to secure all other rights.” Jurisdictions are advised to “eliminate the minimum age requirement” at which children can change their legal gender “on their own volition, without the need for medical diagnoses or court determination.” The document emphasises that there should be “no eligibility criteria, such as medical or psychological interventions.”

Finally, in sinister tones, authorities are told to “take action” against parents “who are obstructing the free development of a young trans person’s identity in refusing to give parental authorization when required.”

We may not be well informed about the reasoning but we are seeing the effects, and it is time for governments and individuals to start asking some very hard questions before the rights of women and the safeguarding of children are sacrificed to social engineers who wish to change even the way we think.

Debbie Hayton is a high school teacher and trade union officer. She teaches science to 11-18-year-olds at a school in central England. As a transgender person, she has written extensively about what it means to be trans and how trans people can be included in society without compromising the rights of other vulnerable groups. Her work can be read in publications from across the political spectrum, where rational scientific debate is allowed and encouraged. Follow her on Twitter @DebbieHayton