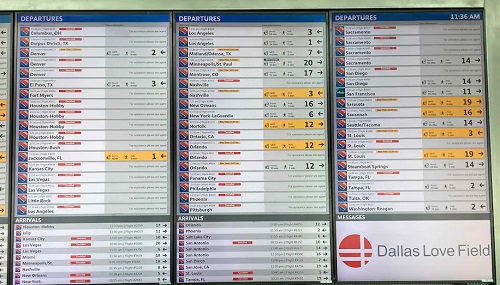 Southwest Airlines canceled at least 1,800 flights over the weekend, citing “bad weather” and air traffic control problems, though federal regulators attributed the weekend service disruptions to problems with the airline’s personnel and aircraft.

More than 1,000 flights scheduled for Sunday, or nearly 30 percent of Southwest’s schedule, were canceled, according to FlightAware, a flight-tracking website. Another 800 flights were canceled Saturday, and the airline has reported more than 1,500 delayed flights since Saturday.

In a statement Sunday afternoon, Southwest said the cancellations began Friday as a result of weather problems at Florida airports, which “were exacerbated by unexpected air traffic control problems in the same region, causing delays and resulting in significant flight cancellations beginning Friday evening.”

The Federal Aviation Administration confirmed the shortage of air traffic controllers that caused Friday’s delays from Florida, but said some airlines were experiencing operational problems because of their own staffing and logistical problems.

“Flight delays and cancellations occurred for several hours Friday afternoon due to widespread severe weather, military drills and limited staffing in one area of the Air Traffic Control Center in Jacksonville,” the FAA said in a statement Sunday afternoon.

“Some airlines continue to have scheduling problems because planes and crews are not in their seats.”

Southwest said it is working to redeploy planes and crews to resume normal operations.

“With fewer flights between cities on our current schedule, recovery during operational problems is more difficult and time consuming,” the company said.

While Southwest blames weather and traffic control problems for widespread flight cancellations across its network, no other airline reported similar service disruptions this weekend. American Airlines, for example, had canceled about 63 flights as of early Sunday afternoon, while United Airlines had canceled only nine.

The Southwest Airlines Pilots Association said Saturday that while it is aware of “operational difficulties affecting Southwest Airlines … we can say with certainty that our pilots are not involved in any formal or informal work actions.”

The union added: “Our pilots will continue to overcome Southwest management’s poor planning as well as any external operational challenges and remain the most productive pilots in the world.”

On Saturday, Southwest tweeted that air traffic control problems and “disruptive weather” had led to a large number of flight cancellations and asked passengers to be patient.