What is behind the rapid disappearance of the delta variant Covid-19 in Japan? Maybe it’s self-destruction. 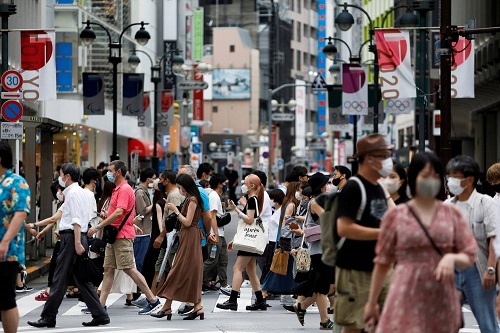 Why did Japan’s fifth and biggest wave of the coronavirus pandemic, driven by the supercontagious delta variant, suddenly come to an abrupt end following a seemingly relentless rise in new infections? And what made Japan different from other developed countries that are now seeing a fresh surge in new cases?

According to one group of researchers, the surprising answer may be that the delta variant took care of itself in an act of “self-extinction.”
Three months after the delta variant spurred record daily nationwide caseloads of nearly 26,000, new COVID-19 infections in Japan have plummeted, dropping below 200 in recent weeks. Highlighting that drop was the fact that no deaths were reported on Nov. 7 — the first time that had happened in about 15 months.

Many scholars point to a variety of possibilities, which include one of the highest vaccination rates among advanced countries with 75.7% of residents fully vaccinated as of Wednesday. Other potential factors are the social distancing and mask-wearing measures that are now deeply embedded in Japanese society.

But the chief reason may be related to the genetic changes that the coronavirus undergoes during reproduction, at a pace of around two mutations per month. According to a potentially revolutionary theory proposed by Ituro Inoue, a professor at the National Institute of Genetics, the delta variant in Japan accumulated too many mutations to the virus’s error-correcting, non-structural protein called nsp14. As a result, the virus struggled to repair the errors in time, ultimately leading to “self-destruction.”

Studies have shown that more people in Asia have a defense enzyme called APOBEC3A that attacks RNA viruses, including the SARS-CoV-2 virus that causes COVID-19, when compared to people in Europe and Africa.

So the researchers from the National Institute of Genetics and Niigata University set out to discover how the APOBEC3A protein affects the nsp14 protein and whether it can inhibit the activity of the coronavirus. The team conducted an analysis of the genetic diversity data for the alpha and delta variants from infected clinical specimens in Japan from June to October.

They then visualized the relationships among the DNA sequences of the SARS-CoV-2 virus to show genetic diversity in a diagram called a haplotype network. In general, the bigger the network is, the more positive cases it represents

The network of the alpha variant, which was the main driver for Japan’s fourth wave from March to June, had five major groups with many mutations branching out, confirming a high level of genetic diversity. The researchers thought the delta variant, which the U.S. Centers for Disease Control and Prevention says is more than twice as contagious as previous variants and might cause more severe illness in unvaccinated people, would have a far more vibrant genetic diversity.

Surprisingly, they found the opposite to be true. The haplotype network had only two major groups and the mutations seemed to come to a sudden stop in the middle of its evolutionary development process. When the researchers went on to examine the virus’s error-correcting enzyme nsp14, they discovered that the vast majority of nsp14 specimens in Japan seemed to have undergone many genetic changes in mutation sites called A394V.
“We were literally shocked to see the findings,” Inoue told The Japan Times. “The delta variant in Japan was highly transmissible and keeping other variants out. But as the mutations piled up, we believe it eventually became a faulty virus and it was unable to make copies of itself. Considering that the cases haven’t been increasing, we think that at some point during such mutations it headed straight toward its natural extinction.”
Inoue’s theory, while innovative, would lend support to the mysterious disappearance of the delta variant’s spread in Japan. While much of the rest of the world with similarly high vaccination rates, including South Korea and some Western countries, are suffering from record waves of new infections, Japan appears to be a peculiar case in that COVID-19 cases have remained subdued despite trains and restaurants filling up following the end of the most recent state of emergency.

Indeed, the unexpected plunge in new cases following the summer wave has been a hot topic of discussion among many experts, including those not conducting studies on the coronavirus, according to Takeshi Urano, a professor at Shimane University’s Faculty of Medicine who was not involved in the research led by Inoue.

“Nsp14 works with other virus proteins and has a critical function to protect the virus RNA from breaking apart,” he said when asked about Inoue’s findings. “Studies have shown that a virus with a crippled nsp14 has a significantly reduced ability to replicate, so this can be one factor behind the rapid decline in new cases. The nsp14 is virus-derived, and the chemical agent to curb this protein could become a promising medicine, with development already underway.”

Japan seems to be an anomaly in that the delta variant was virtually shutting out alpha and other variants by late August. On the other hand, other countries — including India and Indonesia, both of which were hit particularly hard by the delta variant — have reported a mix of alpha and delta strains among cases.

A similar natural extinction of the coronavirus could possibly be observed overseas, Inoue says, adding that detecting that would be difficult as no other country seems to have accumulated as many mutations in the virus’s nsp14 as in Japan, though similar mutations at the A394V site have been discovered in at least 24 countries.

But Inoue’s theory may also help explain why the outbreak of severe acute respiratory syndrome (SARS) ended abruptly in 2003. An in vitro experiment in which the researchers caused mutations in nsp14 in the virus that causes SARS led to findings that the virus eventually could not replicate itself as mutations piled up.

“No genome data exists, so it’s just a hypothesis, but because it has disappeared, it will never see the light of day again,” he said.
So what are the chances that we could see a similar natural extinction overseas of the COVID-19-causing SARS-CoV-2 virus?
“The chances are not zero, but that seems too optimistic for now as we’re unable to get hold of any such evidence, though we have looked at various data of other countries,” he said.

Since peaking in mid-August, daily COVID-19 cases in Japan continued a downward slide to fall below 5,000 by mid-September and under 200 by late October. The country has been enjoying one of the lowest infection rates of any advanced country for some time, but it’s not immune to the next wave of the pandemic, Inoue says.

“There’s clearly a threat,” he said. “We have been all right because there was a delta variant. Other variants sneaked in little by little but Japan’s delta was keeping them away. But because there’s nothing now to keep them at bay, there’s room for new ones to enter as the vaccines alone would not solve the problem. In that sense, I think the quarantine measures for immigration control are very important because we never know what comes in from foreign countries.”

Some people may wonder if the self-extinction of the delta variant in Japan was caused by something special in the genetic make-up of Japanese people, but Inoue disagrees.

“I don’t think so,” he said. “People in East Asia, such as Koreans, are ethnically the same as Japanese. But I don’t know why this observation was made in Japan.”

Inoue said that the team of researchers at the National Institute of Genetics and Niigata University plan to compile a study on their findings by the end of November.