10 frightening technologies of the future 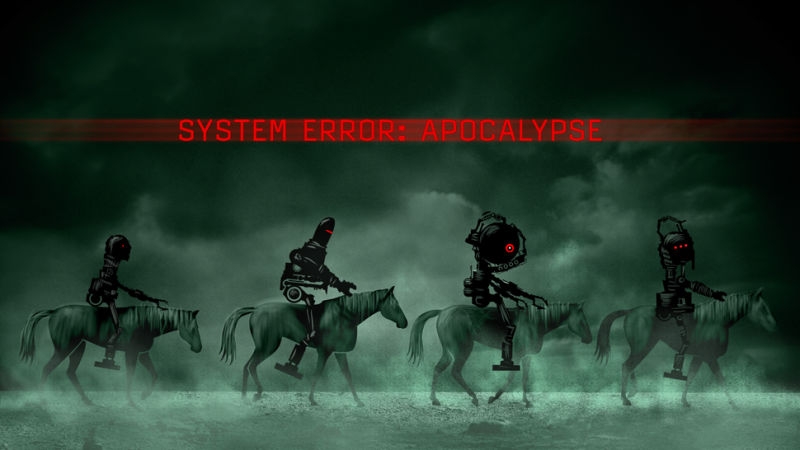 The deeper we dive into the 21 first century, the more clearly appear the fantastic opportunities that are opening up before us. And the more clearly we experience a gloomy feeling, when you think about them. Before you ten frightening technologies, which would be better to have never existed. When you get familiar with it, it is clear that many of these technologies could be put to good use. But it is important to draw the dividing line between the technology itself and how it can be used.

Take, for example, nanotechnology. As you develop, you can use them to put an end to the permanent deficit, cleaning the environment, to alter human biology. But they can also be used for very rapid destruction of our planet. So when the time is right to develop and use these futuristic technologies, we’ll have to approach this responsibly. Maybe we’ll come around to the idea that a separate series of technological developments and the risks associated with it are not worth the benefits. For example, artificial swarchitect.

Some of the technology objectively dangerous. Here is what this says about Patrick Lin Director, Ethics + Emerging Sciences Group California Polytechnic state University:

“The idea that technology is neutral or irrelevant to morality, it is a myth to dispel. The designer can imbue ethics creation, even if the subject has no moral agent in itself. This feature may be too subtle in most cases, but some technologies were born from evil, and do not have beneficial uses, for example gas chambers. Moreover, although the technology can be inherently good or bad, and everyone agrees that most technologies have both good and bad versions of the applications. If the probability of the use of technology in the name of evil is higher than for good, perhaps this technology should not develop”.

Hardly anything else can put an end to our reign on Earth faster than the military or severely damaged — nanotechnology molecular Assembly.

This threat stems from two extremely powerful forces: the uncontrolled self-replication and exponential growth. A nihilistic government, non-state agent or a private person may develop microscopic machines that will consume critical resources of our planet at the speed of a forest fire (very quickly), while the fruit in large numbers and leaving a useless by-products along the way — futurists call this scenario the “grey goo”.

Nanotechnology theorist Robert Freitas has proposed several possible variants of occurrence of disastrous for the planet of nanotechnology, including gray dust, gray plankton, gray lichens and so-called murderers of biomass. Gray dust will hide us from sunlight, grey plankton would consist of grown on the bottom of the ocean replicators, which will devour the whole land is rich in carbon ecology; grey lichens would destroy land-based Geology, and biomass killers attack a variety of organisms.

According to Freitas, the worst case scenario of “global ecophagy defenses will only take about 20 months, which is more than enough to construct an effective defense. Under the protection Freitas is referring to countermeasures in the form of self-replicating nanotechnology or system that disables the internal mechanism of nanobots. On the other hand, we could deploy an “active shields” in advance, but most experts in the field of nanotechnology agree that it would be useless. Consequently, the need to develop and maintain a moratorium on the creation of combat nanotechnology.

Once we give machines artificial consciousness, it is accepted as self-evident. But before moving forward to such a future, we need to think very seriously. It might be too cruel to build a functional brain inside a computer — and this applies to both animal and human emulations.

In 2003, the philosopher Thomas Metzinger argued that it would be horrendously unethical to develop software that can suffer:

“What would you say if somebody came and said, “We want to genetically engineer mentally retarded human infants! According to some acceptable scientific progress reasons, we need infants with certain cognitive and emotional disabilities, in order to study their postnatal psychological development — we urgently need funds for this important and innovative type of research!”. You would have thought that it is not only absurd and dubious, but also dangerous idea. It would not miss none of the ethics Committee in the democratic world. However, the current ethics committees don’t see that the first car that meets the minimum conditions of conscious experience, can be just as retarded babies. They can suffer from all kinds of functional and representational deficit. And they will subjectively feel this deficit. Moreover, they will have no protection and no representatives in the ethics committees”.

Futurist Louis helm agree with him:

“Computers are especially good because you can calculate the amount of millions of columns in a table and not get tired, not bored. Since we plan to use artificial intelligence as a replacement of mental labor, I think it would be immoral to create a reasonable program. To sharpen a conscious being in the car and make it work for you — it is almost slavery. Furthermore, consciousness is a fragile thing. A few incorrectly encoded genes in humans can cause down syndrome, schizophrenia, autism or epilepsy. What it’s like to possess a incorrectly programmed form of consciousness? For example, a few well-funded developers AI decides to recreate the human mind in machines by simulating the biological structure of the human brain. I expect and even a little hope that these first attempts of simulation will be too rough to really fade. But in the case of “success”, the first results probably will generate a strange, unpleasant and cropped as subjective experience. As a programmer, I’m against self-aware artificial intelligence. Not because it will not cool. But because I am morally against slavery, torture and bad code”.

Not that I strongly believed in the possibility of time travel (aren’t we all traveling through time right now?), but drop it from accounts is not worth it. Moreover, we need to stay away from her.

Time travel can be dangerous as hell. Any movie about tangled time lines will tell you of potential dangers, including unpleasant paradoxes. And even if some form of quantum time travel will be possible — when created a completely new and separate time-line of cultural and technological exchange between different civilizations is unlikely to end well.

The prospect of the existence of machines that can read minds and memories of people at a distance and not with their consent and without concern. But this is unlikely to be possible until the human brain becomes more closely integrated with network and other communication channels.

Last year, for example, scientists from the Netherlands used data from brain scans and computer algorithms to determine which letters looking man. This breakthrough demonstrated the possibility of reconstruction of human thoughts with an unprecedented level of detail by a third person — including what we see, what you think you remember. If such devices fall into the clutches of a totalitarian regime or police state, life becomes impossible and unbearable. The world will be like George Orwell’s, which will be punished even for crimes committed in the thoughts.

There is a possibility that our consciousness can be changed, along with our knowledge and memories. As soon as we receive the chips in the brain and all barriers fall, our minds will be open to the entire Internet and all its evils.

The first step towards this goal, we have already made. Not so long ago an international group of neurologists started an experiment that will allow participants to communicate from brain to brain via the Internet. Cool, you might think, but such technical telepathy opens up a whole Pandora’s box. An attacker could obtain the ability to modify memories and intentions of the victim. What if this opportunity will receive the whole of the organization or paranoid of the government?

The potential of Autonomous cars, kill people, scare all — and this is probably the first item on the agenda that you want to start a fight.

Here is what futurist Michael Latorra:

“We don’t yet have machines that possess General intelligence close to the human level. But for operations Autonomous robots with lethal abilities, the intelligence of human level is not required. Building all sorts of robotic military machines are already in full swing. Robotic tanks, planes, ships, submarines, and robots-soldiers — all this is possible today. Unlike unmanned drones, remote controlled, military robots can identify targets and destroy them without human pointers, and the order to shoot. The danger of such a technology should be obvious, but should not be limited only to the threat of “friendly fire”, when the robots accidentally kill people on their side of the conflict, or even innocent citizens. Where great danger lurks in the international arms race that could unfold if any country will start to build Autonomous combat robots. After several cycles of improvements, the race to create even more powerful military robots can cross the threshold, when the latest generation of Autonomous robots will be able to overcome any military system under the control of the people. And then, accidentally or intentionally, humanity is able to put himself in a terrible position, will be crushed by the victims fighting robots”.

This is another topic that concerns many. In 2005 ray Kurzweil and bill joy noted that the publication of the genomes of deadly viruses for the whole world will be a killer recipe. There will always be an idiot or a bunch of fanatics, who will take this information into service and either rekonstruiruet virus from scratch or modify existing viruses, making them even more dangerous and then release into the world. It has been estimated, for example, that a modified avian flu could wipe out half the earth’s population. And scientists from China and all have combined avian and swine flu, created with the mutant. The purpose, of course, was to understand, to know the enemy and develop possible countermeasures before a real pandemic breaks out. But there is always the danger that the virus escapes from the lab and wreaks havoc among the people. Or that it will adopt and pulls the chain.

It’s time to think about this grim possibility before something terrible would happen.

What will be the torture and prison, if people can live for hundreds or thousands of years? What will happen to prisoners if their minds to download into the virtual world? Of ethics Rebecca roach investigates these terrible scenarios:

“The advantages of immortality is obvious — but along with it may increase the penalty. If thirty years of imprisonment deemed too lenient a punishment, the offender can give life and taking into account increased life expectancy. A life sentence will turn into a few hundred years, for example. However, the company may be more expensive to keep these criminals. But if increases in life expectancy will be available everywhere, centenarians will undoubtedly contribute to a long-lived workforce.

Download of the consciousness of the crime committed and the acceleration of it in a million times will allow him to “work off” a crime with a punishment of 1,000 years for eight and a half hours. It will be cheaper than to keep a criminal on taxpayers money the same 1000 years. Following this, a concentrated punishment may be followed by rehabilitation, also for a few hours.”

The creation of hell

This option is similar to the previous one. Some futurists foresee the creation of Paradise— the use of advanced technologies, including the uploading of consciousness and virtual reality that will transform the Earth into a Paradise. But if you can create heaven, you can create and hell. This prospect is especially frightening, given the uncertain duration of life, as well as almost limitless possibilities of psychological and physical punishment. It’s hard to imagine that someone, in principle, will want to develop such thing. But that someone can be artificial swarchitect. You remember the problem of Roko Basilisk?