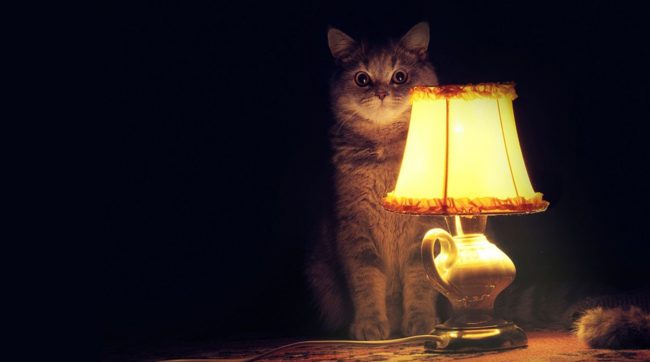 Halloween comes, and it means that there has come time, as well as possible suitable for terrifying stories. But as our website acquaints you with novelties of science, the equipment and technologies, and horror stories will be on scientific and pseudo-scientific subject. Take places more conveniently, muffle the light sources, you are waited by ten the most modern scientific stories and events capable to overtake for goosebumps on your body. 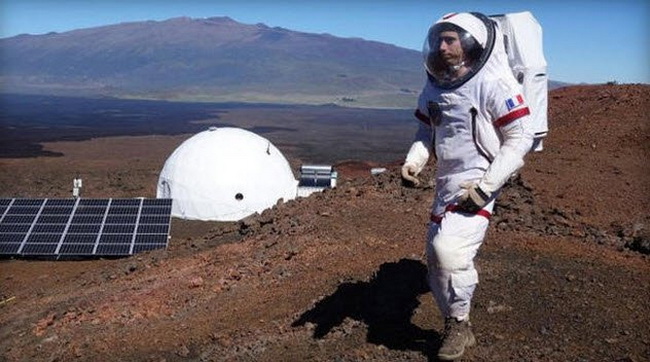 Scientists continue active development of technologies and preparation for the piloted flights to Mars and its possible further colonization. Quite recently the U.S. President Barack Obama declared that the government closely cooperates with private space sector to realize these plans by 2030th years. However results of one of the last researches can give up as a bad job all these dreams and hopes.

Within a laboratory experiment scientists subjected mice to impact of special type of charged particles (the same particles will influence astronauts within flights in deep space). The result was deplorable.

Impact of particles led to an inflammation of a brain of rodents that developed subsequently into weak-mindedness, loss of cognitive capabilities and finally to decrease in a conditional threshold of “fear of disappearance”. Loss of “fear of disappearance”, in turn, can lead to feeling of fixed alarm which eventually will pour out in this madness.

Six months later after laboratory experiments signs of “space madness” were still observed at examinees of rodents. By this moment scientists don’t know how completely to secure people against impact of these harmful space particles. 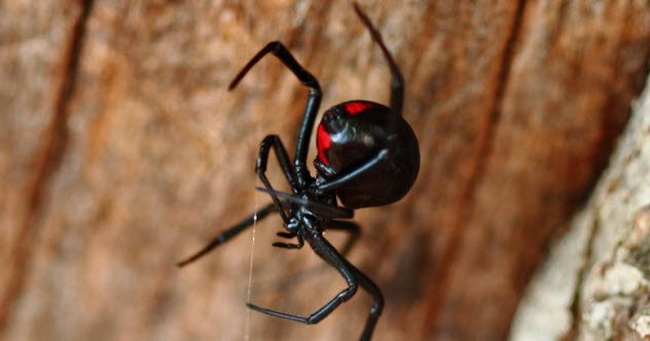 Most often the purpose of the new found WO virus are bacteria which usually live in insects (in particular spiders). The virus which is a bacteriophage has one very interesting feature. One third of its DNA completely corresponds to the characteristic of toxin of a spider the Black widow. Scientists are surprised how a part of DNA of an animal could become a part of own genome of a virus.

As a rule, viruses remain within one biological borders, infecting only certain type of organisms. Scientists assume that the genetic code of a virus mutated that allowed it to infect absolutely other type, than it was initially. The principle of infection with the WO virus occurs as follows. It gets to an organism, infects bacteria which in turn envelop cellular membranes of spiders. Somehow the virus which mixed up with DNA of a spider escapes out of limits of this biological barrier and gets direct access to toxins. As a bonus — the virus is capable to bypass immune system of the carrier without problems.

Finally we have quickly mutating virus which is completely protected from immune system of the carrier and possessing a terrible genome of toxin of the black widow. And the fact that the purpose of this virus isn’t the human body doesn’t comfort at all. Nobody knows yet in what further this virus will be able to mutate. 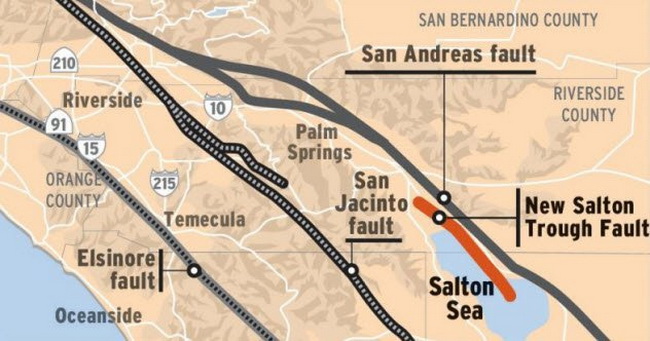 Many years seismologists say that the well-known tectonic break San Andreas who is near the western coast of the USA has ripened to cause a catastrophic earthquake measuring 8 points and above on the Richter scale. Now scientists tell that they have found an explanation for why this break so long “was silent”. It appears, practically in parallel with him there is the second break which, perhaps, and doesn’t allow to begin to a real crash.

Extent of a break of Salton Trough makes 56 kilometers. His opening has allowed to present a full picture of possible danger to the region, including all territory of Los Angeles.

In spite of the fact that the new break can reduce a part of strain which is experienced by San Andreas that, in turn, could explain its relative stability, scientists already sound the alarm and speak about “essential increase in level of danger and catastrophic consequences according to computer models”. 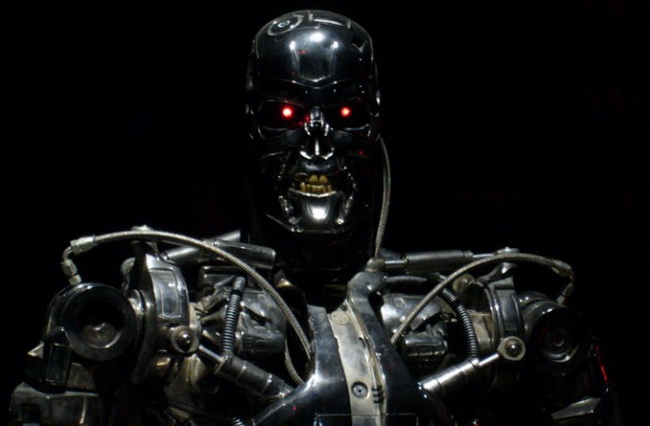 Despite some clear advantages from use of the artificial intelligence (AI) in the future, the group of researchers of Carnegie Mellon University decided to show to the world what the world hopes to see never in this most future. Scientists trained advanced neural network to kill everything that occurs in its path.

Fortunately, they did all this in the virtual environment developed especially for such purpose. The machine was taught to be played in a computer shooter game of Doom of 1993 of release. The trained neural network moves in this virtual world the same as it is done by the human player. In addition, she knows some feature of work of a game cursor of this game. As you could already guess, not a lot of time that the machine learned to dominate over all opponents in this game was required.

Most it is interesting that training happened by “method of a carrot and stick”. For murders the machine was encouraged, and for misses and insufficient drawing a loss to opponents “perished”. Researchers resorted to such method because the neural network initially decided that infinite firing and “vykashivaniye” of everything that moved to its field of vision was the optimum strategy of a victory. Fortunately, the present version of system is capable to play games only. 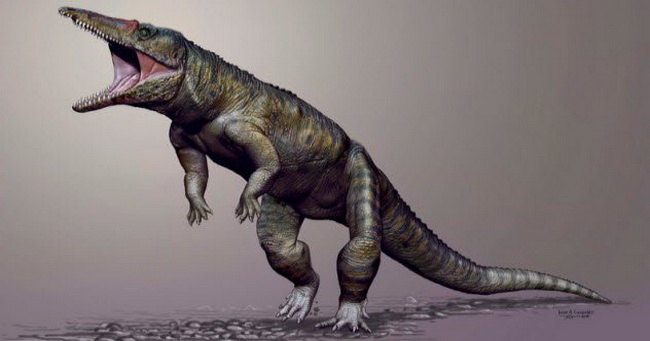 Paleontologists from University of the State of North Carolina have found recently earlier unknown look which has appeared ancient dinosaurs and is a far ancestor of present crocodiles.

In spite of the fact that he has died out more than 230 million years ago, the fact that such animal once went on the ground, can overtake for some shiver, and especially impressionable even to dream in nightmares. You judge. Have nicknamed him Carnufex carolinensis (“The Carolinian butcher”). It was the huge crocodile of 3-meter growth. Growth, but not length is specified not by mistake here. All the matter is that this creature went on two legs as the person.

Not water, and firm surface on which he went and destroyed all who occurred in his path was native elements for him. With teeth keen as a razor and improbable endurance and mobility of his modern descendants of Carnufex, most likely, was one of the most dangerous predators in a food chain until dinosaurs have appeared. 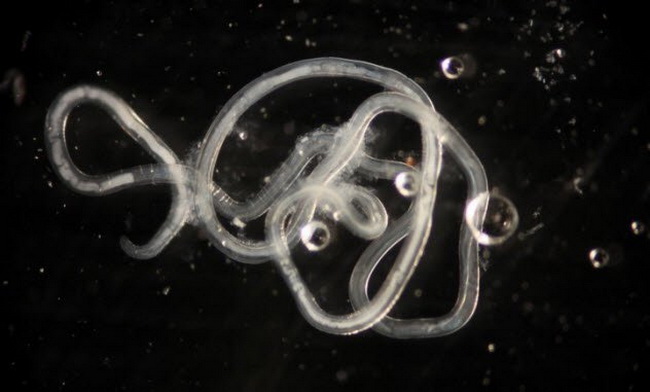 Professor Johnathan Allen has faced very unexpected problem when has found some unclear skin swelling on inside of the cheek. Further — it is more. The person has found out that this swelling passes into other zones from time to time. Finally, conducting educational examination, professor has felt that swelling has moved to a forward part of a gum. Having looked in a mirror, Allen has noticed that under thin skin there is a tiny worm.

It has by a lucky chance turned out that Allen is an expert in biology of invertebrate organisms, and the person inquisitive. He has independently taken a live worm from the gum and after the research has found out what in all territory of the USA has been noted only 13 (including this) similar cases of infection with this parasite. About the uninvited guest professor has written scientific work, and the worm was nicknamed by “Friend”.

At the moment in front of the Juno spacecraft the 20-month mission for collection of scientific data on Jupiter is delivered. In case of the most dense rapprochement with gas giant “Juno” wrote down the weak radio waves which are let out by the polar lights of the planet by means of the tool created at University of Iowa.

Engineers of university created sound files on the basis of these data. Any sound producer of space horror films would be proud of the received result. The sounds increasing, decreasing on a tonality reminding the squeals passing into almost audible human voices are capable to cause goosebumps even in the most burned fans of “Strangers”.

The scientific background in it is available too. These radiations, the strongest such in the Solar system, are generated by electrons of an unknown origin, and scientists hope to solve a riddle of their source sooner or later. 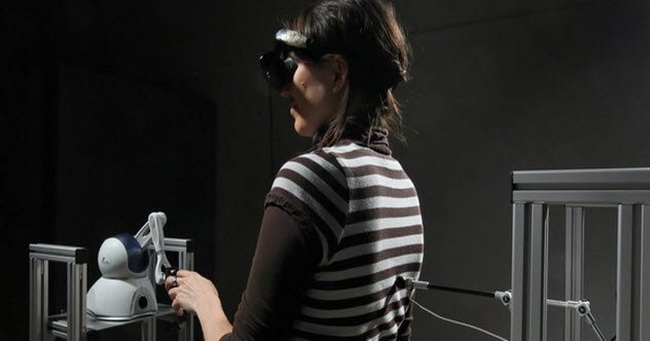 For certain many of you felt as if someone tracks you. And at this moment you, perhaps, even realized that it is, most likely, a play of your imagination, and you are sure that near you there is nobody, but at the same time feeling that someone tracks you, didn’t become less intense. Quite perhaps, scientists found an explanation for why it occurs, and even how this feeling can be reproduced intentionally.

Researchers made an experiment. Invited 12 volunteers who anyway had similar feeling. It turned out that at all 12 people the brain sections which are responsible for self-perception were damaged. It led scientists to a hypothesis that at such people own positional signals of the body were misinterpreted by their brain. For confirmation of this hypothesis scientists decided to use a robotic hand with fingers which it leaded on a back of people, repeating movements of their own fingers at that moment.

ZombieScientists found special aspect of interaction between a parasitic type of wasps and a certain type of spiders recently. The science knew that wasps can use spiders as a live incubator for the larvae long ago, however recently researchers learned that wasps, in addition, are capable to turn spiders into these controlled zombies.

There is it so. The female of a wasp lays eggs on a paunch of a spider. As soon as egg hatches, the larva takes root into nervous system of a spider, eats his blood and issues in blood system chemical components which in a literal sense turn a spider into unconsciously managed worker for a construction of a strong hornet’s nest.

The modified structure of a web allows to reflect ultra-violet light (instead of to absorb it) that, in turn, increases its efficiency in production capture. As soon as the spider carries out the tasks set by a wasp, as gratitude the last eats him, and then repeats all process anew, but already with a new spider. 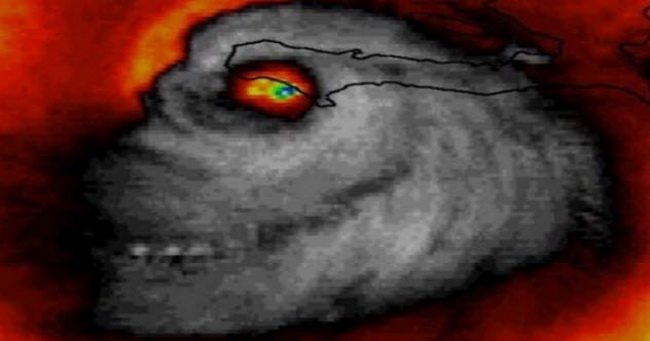