In the childhood we told each other horror stories, frightening by vampires, the zombie, demons, ghosts… However sometimes the reality can be stranger and terrible, than fiction, and even in such serious area as science. We offer you a selection of the most terrible discoveries and the phenomena.

In recent years speak about flights to Mars and even his colonization much, claiming that it will begin in 2030. However recently conducted research has led to frightening conclusions. Laboratory mice were subjected to influence of charged particles, similar subjects from which astronauts are subjugators of the Red planet – won’t be protected in deep space.

Influence of these particles has led to an inflammation of a brain of rodents that has caused loss of informative ability and a condition of constant alarm.

Now there is no method of full protection of astronauts against influence of space radiation so it isn’t excluded that future subjugators of Mars are waited by terrible destiny.
DNA theft

The virus under the name WO parasitizes on bacteria which live in cages of some spiders, for example, belonging to a look the black widow. Recently scientists have found out that this virus can “steal” a part of DNA from spiders. It has turned out that WO has borrowed several genes which are responsible for poison synthesis from arthropods and has significantly changed.

Now, thanks to poisonous properties, he is capable to dissolve instantly covers of cages and to get freely inside to begin to breed violently.

Authors of a research claim that it is absolutely unique case – still was considered that viruses “steal” genes only from bacteria, but not from multicellular beings. It is unknown how many is available similar viruses and whose properties they are capable to appropriate.

For many years seismologists claimed that the well-known break San Andreas in the USA has ripened for a terrible earthquake measuring eight or above points on the Richter scale long ago.

However the reason for which accident still hasn’t happened has been found recently. It has turned out that in parallel San Andreas is other break under the lake Salton Sea which, perhaps, holds a tectonic plate from destruction, “delaying” on itself tension in crust. 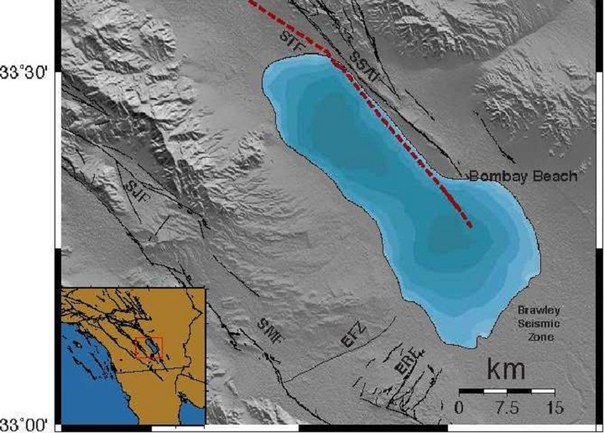 Opening has caused full revaluation of seismic danger to the region in which Los Angeles is located. In spite of the fact that so far the break of the lake Salton Sea serves for decrease in loading on San Andreas, his existence in a case of serious accident increases danger of destruction of the western coast of the USA twice.
Car murderer

Artificial intelligence – it is indisputable, one of the most important technologies of the near future. However researchers of the American University of Carnegie – Mellon have shown recently that he can be very cruel. They have created artificial neural network which can kill all and everyone. However, they have made it in the virtual world, namely in the popular network game Doom.

The artificial intelligence has learned to play, being promoted from creators for murders, and has soon begun to win against all players people. So far he only plays computer games, but who knows that he will be tomorrow…

Paleontologists of the state University of Northern Carolina have found recently a species of an animal unknown to science who is more senior than dinosaurs and ancient crocodiles. In spite of the fact that this terrible being has died out more than 200 million years ago, understanding that it once wandered about the planet, can cause a shiver and nightmares. 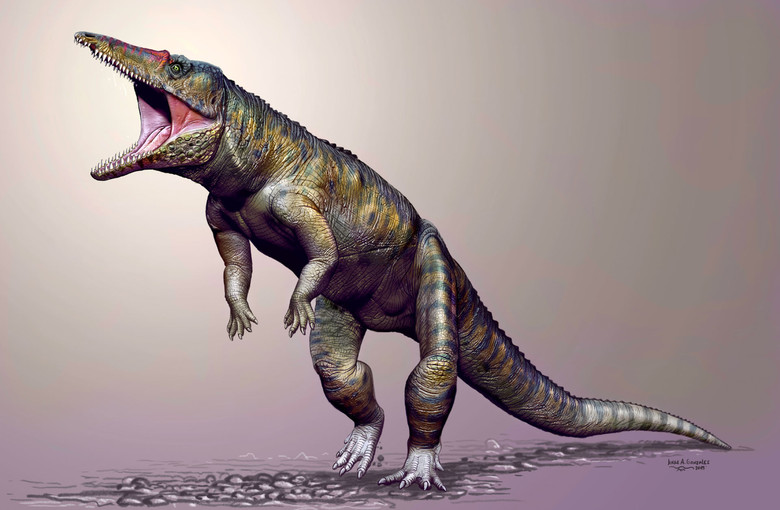 Called this monster of Carnufex carolinensis (“the Carolinian butcher”) – the suitable name for a krokodiloobrazny being about three meters high who went on two legs as the person.

This animal on the land lived and had the terrible teeth similar to edges of a huge blade. Possibly, this being was the most dangerous predator before appearance of dinosaurs.
Buddy’s worm

Professor-biologist from the USA Johnathan Allen in 2012 has felt once that he at him has oddly coarsened the site of face skin. The most frightening has turned out the fact that this site has begun to move on the person. Once, when professor held exams, the spot has moved to his mouth, and in him the small worm began to be looked through.

That worm with the scientific name Gongylonema pulchrum (at the left). He in a lip of other diseased (on the right)

Fortunately, professor was the specialist in invertebrates. Unlike many people who in such situation just would faint he quietly took a parasite from under skin.

It became clear that it is a rare worm who infected only 13 people in the United States, including professor. Case ended with the fact that Johnathan Allen published article about the uninvited guest who was called by Buddy.
Awful soundtrack of Jupiter

The task was set for the automatic interplanetary station NASA under the name “Juno” to collect data on Jupiter, the mysterious gas giant. Flying by over the planet, Juno collected information on planet radio emissions.

Engineers on Earth then decoded the data obtained by the device in sound files. Also were shocked with result – from space depths as though the music written for the horror film with shrill sounds which remind the scared human voices reached. Scientists hope to find out the nature of these sounds.
Ghost behind the back

Sometimes without everyones on that the reasons begins to seem to us that watch us. Even if you know that you around nobody aren’t present, this feeling doesn’t disappear and very much irritates.

Recently such experiment was made. The person was asked to swing hands disorderly. Behind his back at the same time there was a robot repeating all movements of the person.

While movements matched, the examinee didn’t feel anything special. But when movements of the robot stopped being synchronous with the movements made by participants of an experiment, began to seem to people that behind the back there is something terrible. They felt such horror that they asked to stop an experiment.
Spider zombie

Long ago it is known that wasps parasites somehow force spiders to build to themselves very strong nests cocoons of a web. In what way of a wasp turn unfortunate arthropods into obedient zombies?

It appears, the female of a wasp lays eggs in a paunch of a spider. The larva which ripened in a spidery body eats its blood, in reply issuing in the carrier substance which, influencing nervous system of an arthropod, makes him the thoughtless builder of a strong hornet’s nest. After work completion the larva devours the zombie slave, and then lodges in the cocoon constructed by it.
Person of Mathew

The hurricane “Mathew” raged in the fall of this year and led to catastrophic destructions and numerous human losses. Its main blow assumed the people of Haiti which are already exhausted with poverty – on the island not only were destroyed structures, but also more than 1000 people died.

On the infrared image of a hurricane made from the meteorological satellite of NASA on October 4 we see that it is very similar to a skull with an eye which was the center of a hurricane.