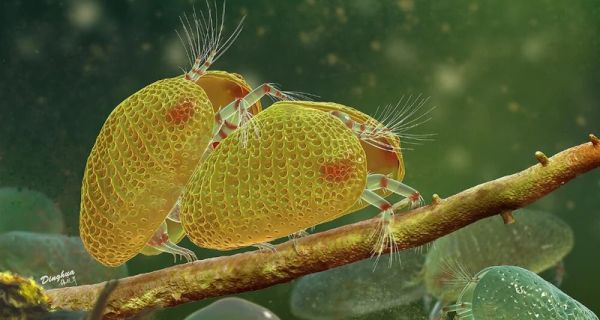 Paleontologists have found in amber sex cells of bivalve crustaceans belonging to the class of shells. Their age is 100 million years.

Shellfish or ostracods are a class of crustaceans, whose representatives first appeared 540 million years ago and still exist today. The overwhelming majority of fossil ostracods are calcified shells. The soft parts of these animals, which can provide much more information about autoecology, are extremely rare.

Researchers, who published their article in the journal Proceedings of the Royal Society B, were able to find a cluster of 39 ostracods in a piece of amber. In this fossilized resin, scientists have discovered males, females and young individuals of this class of animals. It turned out that their soft parts and sperm were well preserved for 100 million years.

Paleontologists analyzed the find using X-ray microcomputer tomography and were able to obtain a three-dimensional image of these animals in high resolution. Using this method, scientists examined male mixoptergias – the genitals of crustaceans – as well as sex cells, hemipenises, and female sperm reservoirs.

In their find, the researchers discovered for the first time the fossil giant ostracod sperm. The accumulation of these cells could occupy more than a third of the entire length of the animal’s body. Analysis of fossil and modern ostracods shows that during sexual reproduction, the male used his dimorphic fifth limb, which has hooked endopodia, to grab the female and insert his hemipenis into the paired vaginas of the female. A pair of male Zenker’s organs then transferred large, but immobile sperm through the male genitals to the female.

Once in the female, the sperm are pushed upward through two long channels, each of which ends in a sac-like sperm vessel for storing the sperm. There, they finally become mobile, organize into a more ordered structure and fertilize the eggs.