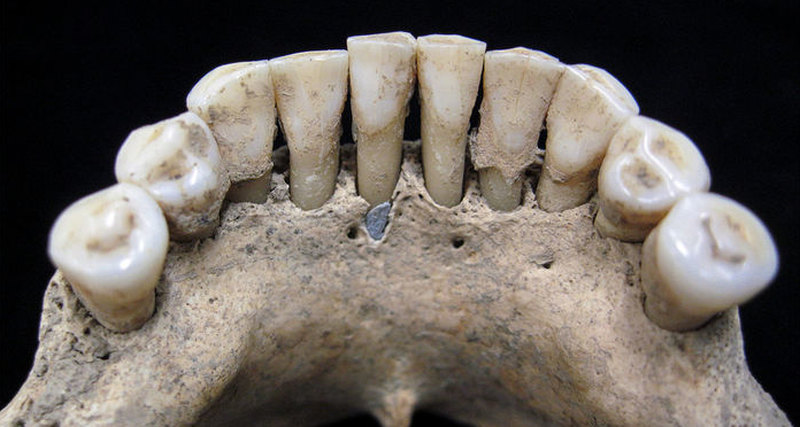 An unusual blue plaque found on the remains of a medieval nun proved that women, like men, were engaged in complex artistic work.

A thousand years ago, a woman in a convent in the territory of modern Germany licked her brush to smooth her hair, and part of the pigment turned into plaque. Ten centuries later, archaeologists discovered that the source of an unusual blue color was lapis lazuli, which reached Europe through half the world. Apparently, this unknown lady was an experienced artist who was commissioned to create high-quality illustrations for religious texts – unique evidence that not only men, but also women in medieval Europe were engaged in such important matters as the compilation and design of books.

Mark Clark, an art historian from NOVA University, notes that this is indeed a great success. “Usually we can’t just dig a skeleton out of the ground and say,“ This is an artist! ”, But here there is no doubt about that,” he explains. When his colleague Christina Warinner, an archaeologist at the Max Planck Institute for Natural Science, began to study the medieval skeleton, she did not expect to find something special. The remains belong to a woman named Hood, who lived in a religious community in Dalheim, Germany, somewhere between 997 and 1162 AD, and died between the ages of 45 and 60. Investigating her teeth, Christina hoped to find traces of germs and the diet, which the inhabitants of the monastery adhered to.

What is so strange about blue plaque? As already mentioned, its source is lapis lazuli, a stone that was mined in Afghanistan at that time. It can be crushed and turned into a saturated pigment of blue or blue, also known as lapis lazuli. In the Middle Ages, this rare dye came to Europe through trade with the Islamic world – it was so expensive that it was used only for the preparation of manuscripts of the highest quality. According to historians, this pigment sometimes cost more than gold.

Medieval artists often made paints and pigments themselves, not trusting anyone to do this hard work. As a result of this process, small pieces of lapis lazuli inevitably remain on clothes and on the skin, so that one careless touch of the brush – and a tiny blue spot on the teeth is ensured. Such vivid evidence of female labor in medieval monasteries is extremely important for understanding the life of monks: everything is complicated by the fact that women rarely signed their works, so that some of them were eventually attributed to men.