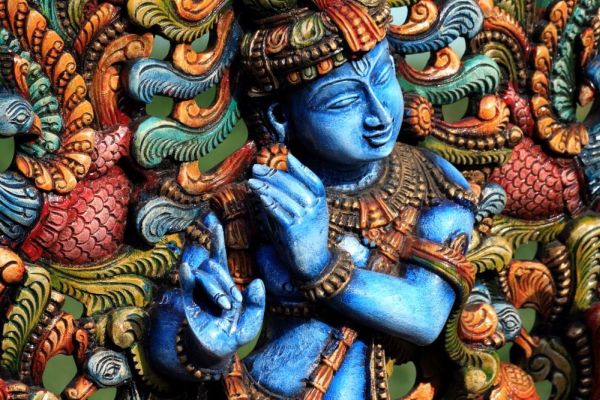 In India, archaeologists have discovered a well-preserved sculpture from the 8th century AD depicting the god Vishnu.

The opening was reported by The Hindu. The sculpture of the god Vishnu, which is about 1200 years old, was discovered on the western bank of the Gundaru River in the village of Ulagani, Kallikudi state. It belongs to the Pandya period.

It is reported that the statue was discovered by Professor Sangania of Madurai University, who was assisted in his work by a student. They reported the find to the curator of the Madurai State Museum, Marut Pandiyan. After that, experts examined the statue.

It was they who, according to a number of features, attributed the sculpture to the Pandya period, dating it to the 8th century AD. They noted that the neck of the deity was decorated with a wide canti – a necklace covered with large precious stones. Similar sculptures from the Pandya period have previously been found in various places such as Tirumalapuram, Tirupparankundram and Sevalpatti.

Experts noted that the sculpture has four arms, two of which are held by the deity in an upright position. The chakra is in the right hand, and the conch in the left. This also indicates that the artifact belongs to the Pandyan period.

By the way, the village of Ulagani is repeatedly mentioned in ancient written sources. True, the name in ancient times was somewhat different. The State Department of Archeology believes that it was called “Kulasegara caturvethimangalam” or “Ulagunimangalam”.

Also known is the 13th century book, which describes the administrative way of life of this settlement. Some original laws were in effect here. For example, the inscription mentions that the village administration levied a special tax from the villagers, which was called pasipaattam. It was a tax on fishing, the funds from which were spent on repairing a local reservoir.