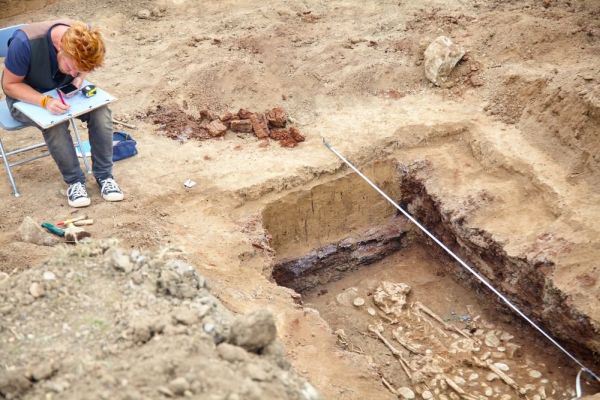 The team of the National Institute for Preventive Archaeological Research (Inrap) of France, during excavations in the town of Giberville (Calvados), discovered several burials of the Bronze Age, among which the magnificent princely tomb stands out.

The research report is published on the Inrap website. In total, four burial complexes of the Early Bronze Age were discovered during the excavations. One of them consists of two large tombs and a dozen more modest tombs. These structures date back to 1800-1600 BC.

According to the researchers, one of the tombs found is exceptional in every respect. She was immediately named princely. First of all, it differed from other burials in larger sizes. Unfortunately, the tomb has not been completely preserved.

Its huge trapezoidal vault was probably topped with some kind of funerary monument. Alas, not even a trace of it remained. But important finds were made inside the structure. First of all, archaeologists found the remains of a buried person. He was buried lying on his back, head to the east.

It is noted that the tomb was built at a time when people were increasingly rejecting the Neolithic tradition of collective burials. Individual burials grew in number, and they reflected the powerful social hierarchy of the time.

If in most of the burials archaeologists practically did not find any ritual objects, then in the prince’s tomb many of them were found. This already indicates the high social status of the buried person. For example, a bronze dagger, fragments of amber jewelry and 14 flint arrowheads were found in the tomb of Zhiberville. Researchers believe that all of these items were intended to confirm the deceased’s high status even in the afterlife.

The items found were carefully examined. Thus, flint arrows turned out to be not simple tips, but rather skillfully made and highly valued products at that time. Arrowheads of this type were found only in several regions of Europe, including western France.

For their manufacture, exotic raw materials were used – translucent yellow flint from the Cher valley. The manufacture of such tips required skillful and delicate work from the master. In addition, they were covered with copper on top. These were very valuable and prestigious goods in that era.

The bronze dagger has a blade 27 cm long and a guard, a handle with six rivets. Only adult men had the right to possess such weapons. Previously, similar daggers were found in two places in France, including in the town of Long-sur-Mer in Calvados. They date back to the period between 1950 and 1750 BC.

As for the fragments of amber jewelry, it has been established that the amber originated from the Baltic Sea. This once again testifies in favor of the version that the tomb belonged to an influential prince. In addition, this is only the fourth burial found in the Early Bronze Age, in which daggers and arrowheads were found.

It is interesting that not far from the prince’s tomb, archaeologists have unearthed truly amazing structures – about 40 Y-shaped hunting pits. Presumably, they were used between 5000 and 1000 BC. These pits, from three to five meters long, narrow and deep, were used to catch big game – deer, bison, roe deer and wild boars. They were combined into a 120-meter trap system.