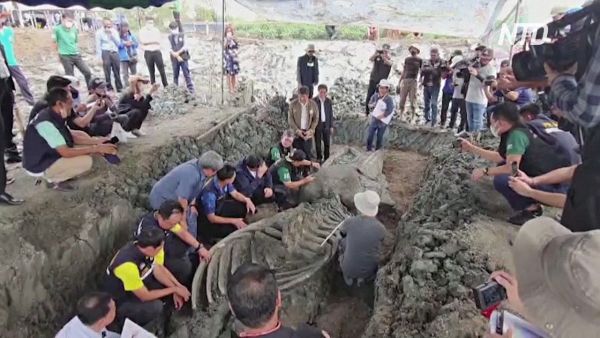 Ai archaeologists are unearthing a very rare find not only for the country, but for the entire Asian region. Not far from Bangkok, a partially fossilized whale skeleton about 5,000 years old was discovered.

[Pannipa Setien, geologist]:
“We found about 36 spine fragments that stretch from the tail to the neck. Before discovery, the tail section was badly damaged. We also found the left shoulder, its fin, 25 parts of the ribcage and the skull. ”

Scientists say that most of the bones have survived.

[Pannipa Setien, geologist]:
“This whale skeleton is currently considered the only one in Asia. We very rarely manage to make such a discovery in almost perfect condition. Yesterday we found the right shoulder and fin, complementing what we already have. Thus, we were able to restore about 90% of the skeleton of the whale. ”

A 12.5 meter long fossil was found by a local cyclist in early November. He noticed a large vertebra sticking out of the ground about 12 kilometers from the sea coast.

The excavations continued for about a month.

Scientists are now putting the pieces together and filling the missing pieces and cracks with a special solution.

As soon as this work is completed, the whale skeleton will be presented at the exhibition.

The sex of the prehistoric animal remains to be determined. Radiocarbon dating is also needed to determine the exact age of the fossils.

Scientists hope these data will help them better understand the geological conditions of the ancient land.