56 million years ago in the U.S. fell by a large comet 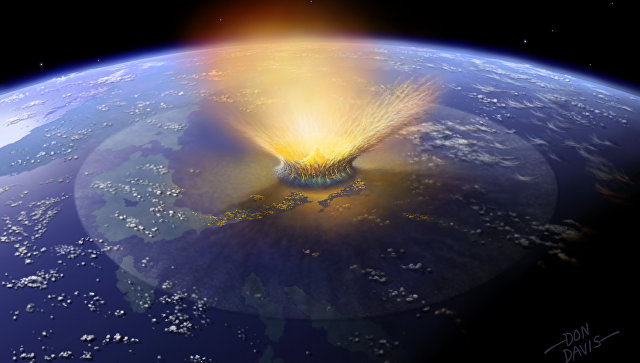 56 million years ago, the first epoch after the extinction of dinosaurs, the Americas fell by a fairly large comet, whose fall almost caused another mass extinction of life and transformed the Earth’s climate in a greenhouse for several hundred thousand years.

Most likely, this decline is directly related to the Paleocene-Eocene thermal maximum. Warming and the comet occurred almost simultaneously and this, we believe, was no accident. If the connection between the comet and the warming is, it means that is climate change and the associated release of carbon dioxide in the atmosphere was virtually instant, says Morgan Schaller from the Institute Renesselaer in Troy (USA).

We are talking about the so-called Paleocene-Eocene thermal maximum – a period of very warm climate on Earth, which began about 56 million years ago, at the beginning of the Eocene epoch of the restoration of life on the planet after the extinction of the dinosaurs. This warming occurred very quickly, within 5-20 thousand years, and it lasted for about 200 thousand years. Today, scientists use the PETM as the closest analogue of current global warming.

The temperature during this maximum was 5-8 degrees higher than today, making the entire planet was a tropical garden, even the Earth’s poles were ice-free. The onset of this period was accompanied by strange changes in the flora and fauna of the oceans, and many other unexplained things. All of this leads geologists to argue fiercely about what exactly was the cause of this warming – volcanoes, some other geological factors, or something else.

Schaller and his colleagues discovered an unexpected confirmation of one of the alternative theories that global warming – fall to Earth of a large comet, studying sediments from the Eocene formed approximately 56 million years ago, during the transition period between the Paleocene and Eocene in the state of new Jersey.

In these deposits, the scientists found the so-called microtektites and microcredit – small beads of melted rocks, which typically occur in the fall of asteroids or comets melting and rapid solidification of drops of rocks, thrown out by them in the collision with the Ground. Chemical composition and high temperature at which any of these balls indicate that they arose as a result of the impact of a celestial body, not in the course of volcanic eruptions.

In this case, the researchers believe that in the Eocene the Earth is a comet, since comets contain a large amount of organic matter and carbon, combustion and oxidation which could dramatically increase the proportion of CO2 in the atmosphere and cause warming.

In addition, the fall of asteroids and comets, as recently discovered by scientists who studied the crater of the asteroid that destroyed the dinosaurs, such a fall can dislodge the oil from the Earth and set fire to it, and to provoke a series of powerful eruptions in virtually every part of the world. All this, according to Schaller and his colleagues, could have caused the Paleocene-Eocene thermal maximum.

As is often the case in Geology and paleontology, of these findings have already met skepticism from other geologists. As the press service of the University of Columbia, two well-known geologist, Charles Langmuir (Charles Langmuir) and Gerald Dickens (Gerald Dickens), adhering to the volcanic theory, has questioned the findings of the authors of the article, noting that the comet was not necessarily caused by warming. The problem is complicated by the fact that the crater left by this cataclysm, has not been found yet, and until its discovery disputes will only increase.