Five-year experimental warming indicated a potential threat to the taiga 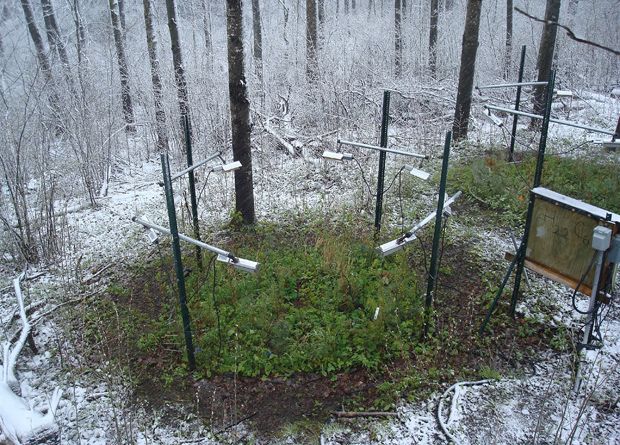 A five-year field experiment in the Minnesota boreal forests revealed the sensitivity of dominant tree species to an increase in ambient temperature – all of them responded to warming by the early start of the growing season. If this happens in natural conditions over large areas, then the connections between species in taiga ecosystems will be rebuilt and even broken, and the risk of capturing trees by invasive species of insects will increase, according to an article published in Proceedings of the National Academy of Sciences.

Taiga is the largest land biome on the planet, its boreal forests make up almost a third of all the forests of the world. It is believed that taiga tree species (and especially conifers) are extremely vulnerable to climate change. At the same time, they play one of the leading roles in global stabilization of the climate, since they bind a large amount of carbon from the atmosphere and fix it for a long time in the hard to decompose forest litter.

The impact of climate change on coniferous and mixed forests is not easy to study: as a rule, all warming in the environment is local in nature and manifests itself in an extreme way for short periods of time, and for correct conclusions it is necessary to observe stable warming and compare the plants affected by it with unaffected ones.

Scientists led by Rebecca A. Montgomery of the University of Minnesota have conducted a multi-year field experiment to monitor the response of boreal trees to rising ambient temperatures. They chose 10 types of trees – six deciduous (two types of oak, two types of maple, poplar and birch) and four conifers (two types of pine, spruce and fir), which grew in three areas. In the first of them (control) the temperature corresponded to the ambient temperature, in the second it was maintained at a level of 1.7 degrees Celsius, and in the third – higher by 3.4 degrees Celsius, and not only air but two were heated in the test areas and soil. Phenological parameters (date and number of buds that have blossomed, the appearance of leaves) were recorded twice a week during the growing season from 2009 to 2013. 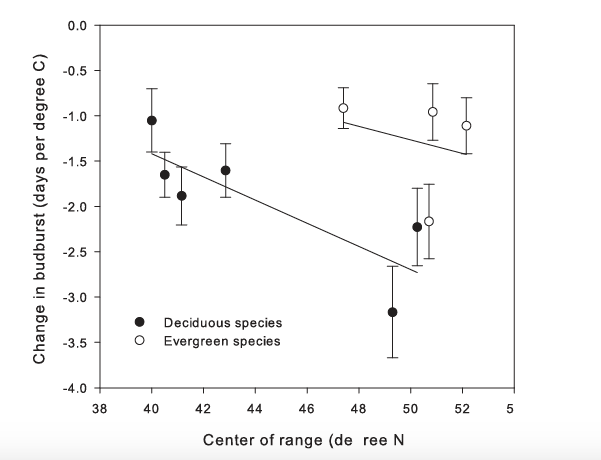 Shifts of the beginning of the growing season (how many days earlier than set, it occurs in increments of +1 degree Celsius). One point corresponds to one of the studied species: white dots are evergreen tree species, and black dots are deciduous.

The greatest shift in the beginning of the growing season occurred in the spring of 2012 at the aspen poplar (Populus tremuloides): it came 13 days earlier when warming by 1.7 degrees Celsius and 15 days earlier when warming by 3.4 degrees Celsius (p <0.0001) . On the contrary, bluish spruce (Picea glauca), red maple (Acer rubrum), and Weymouth pine (Pinus strobus) were not covered by kidneys earlier than usual in 2013. On average, over five years, all types of trees under conditions of warming began to vegetate earlier. The lack of sunlight was critical for paper birch (Betula papyrifera), Banks pine (Pinus banksiana), weymouth pine (Pinus strobus), and large-fruited oak (Quercus macrocarpa) - the maturation of buds on them in shaded conditions was delayed compared to good lighting conditions ( p <0.0001). Changes in the phenological factors of vegetation under the influence of increasing temperatures serve as a marker for many changes in the ecosystem that will affect the growth and productivity of plants, their survival in the event of severe frosts, as well as the health and abundance of herbivorous consumers and the success of invasive species. The study showed that the main tree species in boreal forests (and especially coniferous) are highly sensitive to temperature increase, and this will inevitably lead to a restructuring of the interactions between species and upset the balance in ecosystems. Climatic changes have different effects on groups of living organisms: a recent study showed that they turned out to be beneficial for most insect pests, but many marine inhabitants were forced to leave equatorial latitudes and move in the direction of the poles.