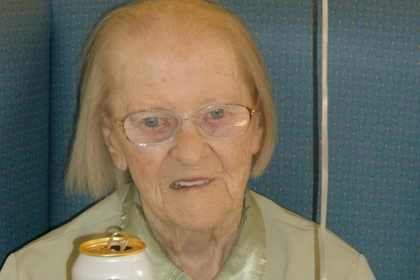 A resident of Great Britain celebrated her 100th anniversary and called beer and biscuits a secret of her longevity.

For Eileen Maher (Eileen Maher), who lives in a nursing home in the city of Blackpool in Lancashire, they have a party in honor of the century. In addition to the traditional cake and sherry, the table served her favorite beer and cookies with vanilla cream. It is these dishes that a woman considers the guarantee of her longevity. At the party, Maher made her first-ever selfie and danced with her best friend’s daughter.

“I did not expect a party for my birthday, but it’s very nice. It was great. I did not get enough sleep, but I’ll do it tomorrow, “the birthday girl shared her impressions.

“She is a special woman. We constantly supply beer for her. She loves him very much, “said Elaine Wright, manager of the nursing home.

At 33, Maher arrived in the resort city of Blackpool for a honeymoon with her husband, a jazz pianist, and stayed in it forever. She fell into a nursing home only in May 2015 after the death of her husband.