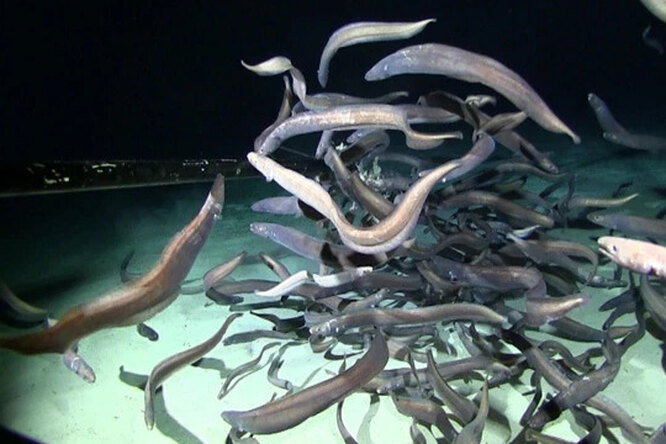 A team of scientists from three renowned oceanographic institutes have found the largest concentrations of fish ever found between 3000 and 6000 meters below the ocean surface.

The underwater world is similar to ours, but turned upside down. And the deeper we go, the more amazing secrets the depths of the ocean will reveal

If you look at the entire ocean, from surface waters to deep trenches, it becomes apparent that in many aspects it is remarkably similar to the inverted version of the surface world that we all live in. For us, the most vibrant region (in terms of altitude) is at or near sea level. It is there that the availability of light, temperature and many environmental factors create the most favorable environment for life. However, if you move higher – for example, take a trip to a high mountain region – the situation will change for the worse. The air will become thinner, temperatures will drop, and the variety of life forms will rapidly decline. Very soon you will find yourself in a place where only the most hardy plants and animals can survive – and there are very few of them.

In the ocean, everything is exactly the opposite. Life is most varied near the surface, where there is a lot of light, a favorable environment and a lot of food. But once you go down, the water will become darker and colder. By the time you get to the depths, you will be greeted by relatively few living things, most of which live solitary lives. They do not hunt, but only expect food to float within their reach.

However, there are exceptions to this rule: volcanic tunnels that provide islands of heat and organic chemicals to support small colonies of creatures. Seamounts rising from the ocean floor can also be added to this list of exceptions, according to an oceanographic team at the University of Hawaii at Manoa, the Monterey Bay Aquarium Research Institute and the National Oceanographic Center (NOC).

“Our observations have produced amazing results,” said Astrid Leitner, study leader. “We have never seen reports of such large numbers of fish in a sparsely populated deep water area with limited food.”

The team explored the Clarion Clipperton Zone, which is a deep water region stretching from Hawaii to Mexico. It is extremely important as in the future this site may become a space for the development of offshore mines that will collect mineral nodules from the seabed. These nodules – natural geological formations – contain copper, cobalt, zinc, manganese and other valuable metals.

As part of their research, the team wanted to establish a basic understanding of the region’s ecology by lowering cameras and baits containing about a kilogram of mackerel on top of three previously unmapped and uncharted seamounts, as well as the surrounding plains.

The resulting video showed that up to 115 predators could swarm at the same time near the bait package, nearly double the previous record for the number of fish recorded at one time in the deep ocean. Some of these eels were captured and brought to the surface for analysis. It turned out that they belong to the species Ilyophis arx – earlier, over many years of searching around the world, scientists managed to get no more than 10 specimens.

Ironically, on the underwater plains, the upside-down trend persisted. The tops of the seamounts acted as islands that were home to many animals, while the plains were empty and practically lifeless.