A flower of 100 million years old was found in amber 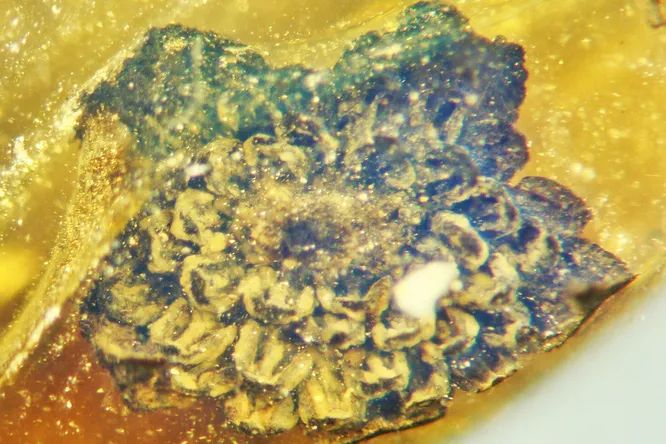 Scientists have discovered a flower of a previously unknown genus and species inside the amber. Dating has shown that the plant existed in the middle of the Cretaceous.

Amber can preserve biological objects for tens and even hundreds of millions of years. The flower found by scientists is one of the first angiosperms, the species and genus of which were still unknown.

Biologists examined in detail a sample of the new plant. They found that the flower is male and contains 50 stamens. It is only 2 millimeters across, so it was a great success to find it. The flower stamen consists of the anther – the pollen-producing head – and the filament that connects the anther to the flower.

The plant species discovered by scientists has a hollow, egg-like calyx – the part of the flower from which the stamens emerge – an outer layer consisting of six perianths and two-chambered anthers with pollen sacs that open through special side valves. According to scientists, this flower was most likely part of an inflorescence with a large number of flowers of different sexes.

The genus of the flower was named Valviloculus, and the researchers named the species pleristaminis. The plant got into amber about 100 million years ago in the supercontinent of Gondwana. Now researchers have found a find in northeastern Myanmar, where the so-called Burmese amber is mined.

The discovery of a flower will help shed light not only on the evolution of plants, but also to learn more about the geological processes that took place in antiquity. Scientists know that angiosperms only appeared on Earth 100 million years ago. The discovery of this flower suggests that the separation of the Burmese plate from Gondwana could not have occurred until 100 million years ago. Meanwhile, in the scientific community, they still argue about the time when this event happened: someone believes that the separation happened 200 or even 500 million years ago.