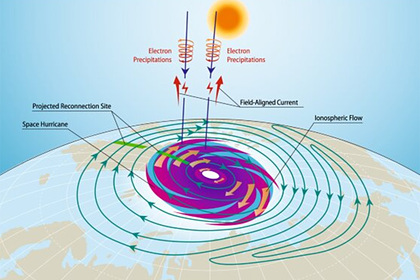 Scientists at the University of Reading in the UK have observed for the first time a giant plasma hurricane that forms in the uppermost layers of the Earth’s atmosphere. This is reported in an article published in the journal Nature Communications. The discovery is summarized in a press release on Phys.org.

Researchers performed a retrospective analysis of satellite images acquired in 2014 using the Defense Meteorological Satellite Program (DMSP). By simulating the Earth’s magnetosphere for imaging, scientists discovered a rotating vortex of plasma about a thousand kilometers wide at an altitude of several hundred kilometers above the North Pole. Until now, scientists have had no evidence of the existence of such structures.

The cosmic hurricane was caused by the interaction of charged particles in the solar wind with the upper layers of the Earth’s atmosphere. It spun counterclockwise, had several spiral arms, and lasted for almost eight hours before gradually collapsing.

The occurrence of a hurricane during a period of low geomagnetic activity indicates that they may be more common in our solar system and beyond.