A huge iceberg breaks off from the Antarctic glacier 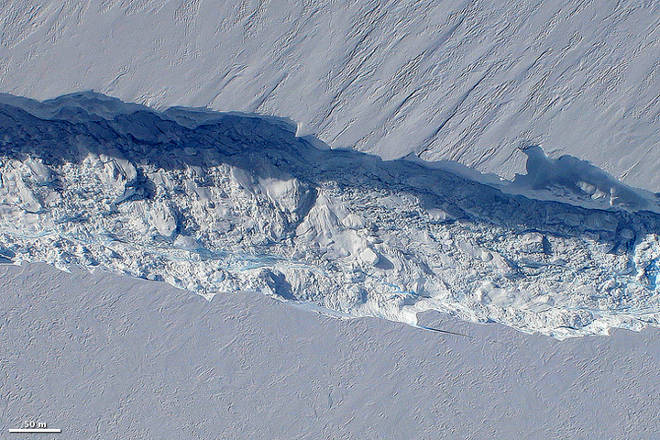 In the middle of the Pine Island ice shelf in Western Antarctica, a 30-kilometer crack formed. At this point, it comes into contact with warm ocean water, which causes its melting from below, explained Stef Lermitte, an employee of the Technical University in Delft (Netherlands).

According to the scientist, the crack may increase another 10 kilometers before one or several parts break away from the glacier. It is noteworthy that in 2017, a giant iceberg broke away from Pine Island. Lermitte discovered a new crack when he analyzed the satellite images he receives every day by email. “It was Wednesday night, October 3rd. Suddenly, I saw what I had not seen the previous day, ”he said.

If the iceberg is intact, its size will be 300 square kilometers, which is more than last year’s, reaching 267 square kilometers. Iceberg formation is natural for a glacier, but as for Pine Island, it began to occur with it more often than before. This will be the sixth large-scale split since January 2001, after which this happened in November 2007, December 2011, in August 2015 and in September 2017.

“Judging by the fact that the rift is already passing through almost the entire glacier, the new iceberg will break off relatively soon,” said Lermitte. According to the scientist, this will happen within a few weeks or months, until the end of the Antarctic summer. As soon as a break occurs, the iceberg is likely to remain frozen if ocean currents do not carry it further north. Then it will melt in warmer waters.

Pine Island Glacier is one of the fastest melting glaciers in Antarctica. Every year, it loses 45 billion tons of ice, which leads to a 1 millimeter rise in sea level every eight years. According to scientists, if it melts all, it will lead to an increase in sea level by 0.5 meters.

Ice shelves are important because they prevent the glacier from entering the ocean completely. As soon as the coming split, the Pine Island Glacier will retreat by almost 6 kilometers.