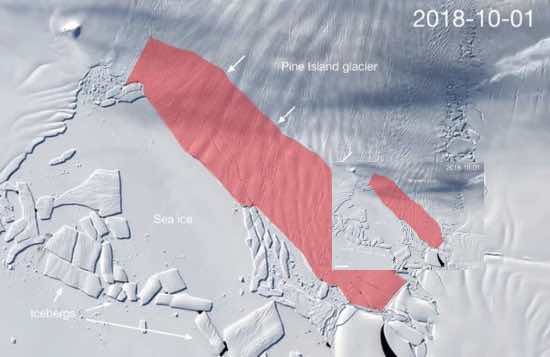 Scientists glaciologists from the Delft University of Technology in the Netherlands found on the satellite images of the 19-mile fault (about 30 km) running through the Pine Island Glacier in West Antarctica. According to experts, the iceberg will come off the glacier in the very near future. The report notes that iceberg formation is natural for a glacier, but as for Pine Island, it began to occur with it much more often than before. This will be the sixth large-scale split of the glacier over the past 17 years. Previously, this was in 201, then in November 2007, December 2011, in August 2015 and in September 2017.

Pine Island Glacier is one of the fastest melting glaciers in Antarctica. Every year, it loses 45 billion tons of ice, which leads to a 1 millimeter rise in sea level every eight years. According to scientists, if it melts all, it will lead to an increase in sea level by 0.5 meters.