A huge mass of ice separated from a glacier in Greenland 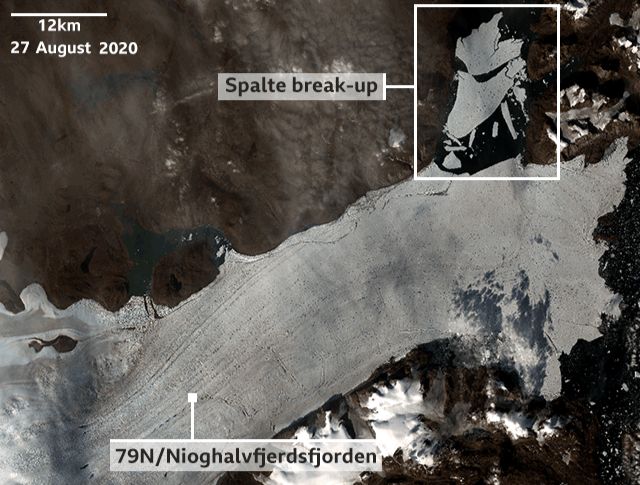 The largest ice shelf in the Arctic, 79N, located in northeastern Greenland, has separated a huge mass of ice. The breakaway area covers about 110 sq. km, satellite images showed that it broke into small pieces, according to BBC News.

Researchers at Friedrich-Alexander University in Germany reported that 79N glacier is approximately 80 km long and 20 km wide. At the leading edge, 79N splits in two, one branch turns to the north, and it is this branch that is currently split.

A big problem for ice platforms is the presence of melt water on them, which fills and widens cracks, this weakens the ice shelf. Oceanographers have noted higher sea temperatures, which are melting the ice shelf below.

Currently, the glacier is somewhat stable due to the fact that it is anchored by several small islands. 79N will take another 10-20 years to decay. The loss of ice underlines the rapid climate change: the region has warmed by 3 ° C since 1980. In 2019 and 2020, Greenland recorded record summer temperatures.

In July, the large Arctic Milne Glacier in the north of Ellesmere Island also lost a large ice mass.