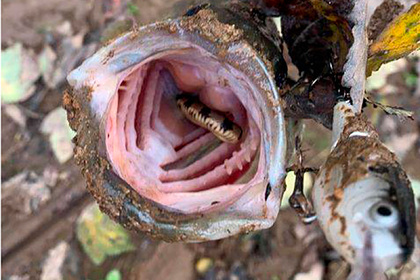 The American caught a fish with a snake peeking out of its mouth. This was reported in a group of the Tennessee Department of Wildlife on Facebook.

Dan Boudrie sent group administrators a photo of a perch swallowing a small snake. “She (the snake – approx.” Lenta.ru “) looked directly at me before I took this picture, – says the man. “It seemed funny to me, but then I wondered how I would explain to the ambulance doctor that I had put my fingers in a fish’s mouth and was bitten by a snake.”

Representatives of the Department of Wildlife of Tennessee joked about the incident, noting that this is another trick of 2020. “Be careful when putting your hand in the fish’s mouth! You never know what might be there, ”they sneered.

The publication has collected hundreds of retweets and dozens of comments. “I found out in the snake recognition group that this is a harmless North American already,” Ginger Yun argued. “It’s a striped one. Not poisonous, but if you suddenly run into it, you can break your neck, “wrote another commentator Marshall Owens.

“If I caught a fish, and then found a snake in it, I would most likely throw out the fish, and the snake, and the fishing rod, and generally float to the other side of the lake! And no pictures! ” – admitted Gary Riddy. “I don’t think I’m going to fish anymore in 2020,” joked Jared Woodruff.

Last year, it was reported that in the American city of Plattsburgh, the couple caught an unusual fish with two mouths. They decided to take some photos and then released the fish back into the lake.