A marine predator of 500 million 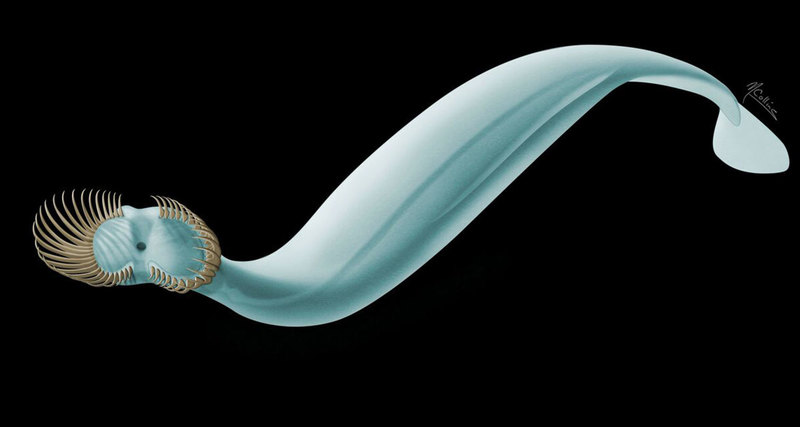 Scientists have fossilized the remains of a tiny faceless marine worm that lived on Earth about 541 million years ago. Its distinctive feature is 50 thorns protruding from the head part. These formidable antennas played the role of jaws that slammed and held prey while she struggled in agony.

The new creature, called Capinatator praetermissus, is so different from all the others that scientists openly declared: fossils are not just a new species, but a new genus, that is, a separate large group of living beings. The length of his body is only 10 cm, and the length of the head spines is 3.8 cm. The sea worm probably ate plankton and small shrimps, like shrimps.

C. praetermissus, apparently, is the ancestor of the sea worms of Chaetognatha, in a multitude inhabiting the World Ocean. The prehistoric representative of worms differs from modern ones with a larger body and much larger and numerous spines, but it lacks characteristic teeth for offspring. This is told by Derek Briggs of Yale University, who led the team that discovered a number of fossils in two national parks in British Columbia, Canada.

“These spikes are similar to miniature hooks, although not so bent. They were tough, and we still do not understand why the worm needed so many trappers. Neo in nature nothing happens “just like that”: apparently, this strategy made him a very successful predator, “argues Briggs.

Capinatator, whose name translates as “swimmer-swimmer,” lived 500 million years ago at a time when the diversity of living beings on Earth began to increase gradually. It is difficult to find complete fossils belonging to the chaetognatha family, because they easily disintegrated from time to time. However, the last find was so good that even soft tissues (!) Appeared on it – and after more than five hundred million years! Thanks to them, scientists managed to reproduce as accurately as possible the appearance of the ancient inhabitant of the seas.