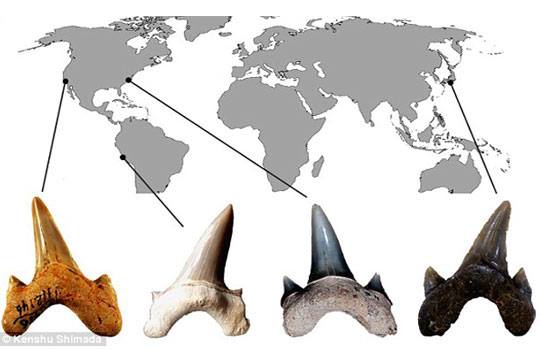 The discovery of a new fossil shark has forced paleontologists to revise the systematic position of the famous Megalodon (Carcharocles megalodon) – a giant sea monster with jaws, the superior strength of the jaw of a Tyrannosaurus Rex.

A newly discovered relative of the Megalodon was much smaller than its size, but the same predatory and dangerous. In addition, he lived almost all the earth’s oceans except the two Arctic, although he was, apparently, extremely rare”

The mysterious predator of the sea, inhabited the seas of the early Miocene about 20 million years ago, was named Megalolamna paradoxodon. Its generic name indicates the visual similarity of the teeth megalomany with modern sharks, such as herring (Lamna nasus). Here only the teeth Megalolamna was much larger and more powerful – up to 4.5 cm And she, according to the estimates of paleontologists, could grow up to four meters in length, just behind the dimensions of the modern white shark.

The species name paradoxodon – paradoxical tooth – displays the sudden appearance of this shark in the geological record. Between Megalolamna paradoxodon and her closest relative of Otodus lived 45 million years ago, mnogomillionniy gaping gap.
Only in the hands of the lead author of the study, Censu Simadi (Kenshu Shimada) from DePaul University, and his coauthors were five single teeth new sharks. They were found in California, North Carolina, Japan and Peru, covering thus most of the coastlines of the Pacific and Atlantic oceans.

All samples come from shallow coastal sediments of the middle latitudes. The shape and size of teeth are good for gripping and cutting relatively large prey, such as fish of medium size.

At first glance, the teeth Megalolamna paradoxodon look like giant teeth of the genus Lamna. However, these fossil teeth are too powerful for Lamna and show a mosaic of dental features reminiscent of the genus Otodus. We believe that this new to science species belongs to the family Otodontidae and is not directly related to Lamna, – said Dr. Shimada.

Megalaima forces to change traditional idea of the family tree of sharks. In the past giant Megalodon (somewhat rash) attributed to the genus Carcharocles, which is part of the extinct family Otodontidae. But since Megalodon and Megalolamna paradoxodon closely linked, now Shimada with colleagues believes that in fact, the Megalodon must be considered in the composition of the genus Otodus, which more accurately reflects its true place in the evolutionary tree of sharks.

The idea that the Megalodon and its close relatives should be placed in the genus Otodus, is not new. But our study is the first of its kind, which logically demonstrates a similar taxonomic judgment. So now the Megalodon should be called Otodus megalodon, – said paleontologist.

The fact that such a large shark with such a wide geographical spread still remain unknown to science shows how little we still know about the ancient marine ecosystem Land – summed Shimada.