A new species of pterosaur discovered, which was initially mistaken for a fish 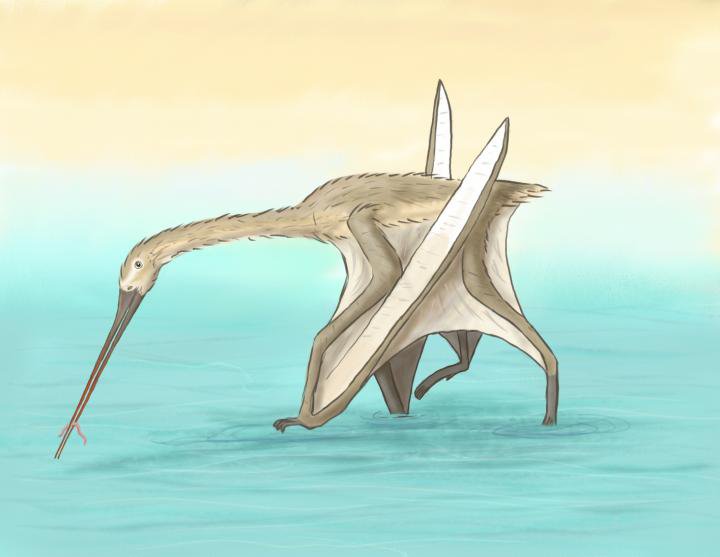 A new species of pterosaur was identified by a fossilized piece of beak. At the same time, it was initially assumed that this is part of a fish fin, but a group of paleontologists from the universities of Portsmouth and Bath discovered an unusual bone texture that can only be seen in pterosaurs.

“We’ve never seen anything like this little pterosaur before. The bizarre beak was so unique that the fossils were not initially attributed to a pterosaur. ”- David Martill, professor at the University of Portsmouth and co-author of the study.

Researchers continued their search in the Late Cretaceous Kem-Kem in Morocco, where the bone was found, and found additional animal fossils that showed it to be a new species with a long, thin beak, like the kiwi.

“Just imagine how delighted I was during my fieldwork in Morocco to find that the lower jaw matched the upper jaw found by Dr. Longreach in this completely unique animal fossil,” says lead author Roy Smith of the University of Portsmouth.

The new species, dubbed Leptostomia begaaensis, used its beak to tear through the earth and clay in search of hidden prey. The pterosaur hunted in the same way as modern waders and kiwis to find worms, crustaceans and small hard-shelled molluscs.

“The diets and hunting strategies of pterosaurs varied. They probably ate meat, fish, and insects. The giant 200-pound pterosaurs probably ate whatever they wanted. Some species hunted for food on wings, while others chased their prey on the ground. Fragments of this wonderful little animal now show a way of life previously unknown to us in pterosaurs. ”- David Martill.

“Leptostomy could actually be a fairly common pterosaur. But there is one oddity: people have probably found pieces of this beast for years, but still did not know who it was, ”said Nick Longreach, co-author of the study at the Milner Center for Evolution at the University of Bath.

Long slender beaks evolved in many modern birds. The most similar to leptostomies are explorer birds such as waders (Charadrii), kiwi (Apteryx), curlews (Numenius), ibises (Threskiornithinae) and hoopoes (Upupa epops). Some of these birds forage on the ground, for example by feeding on earthworms, while others hunt along beaches and tidal plains for bristly worms, crabs and small shellfish.

Based on the fact that the Cretaceous layers of Kem-Kem represent a rich ecosystem of rivers and estuaries, it can be assumed that Leptostomia begaaensis followed the second of these feeding scenarios.

“You might think the pterosaur is mimicking the strategy successfully used by modern birds, but it was the pterosaur that did it first. Birds have reinvented what the pterosaurs had done tens of millions of years ago. ”- Nick Longreach
We underestimate the diversity of pterosaurs, he said, because the fossil record gives us a biased picture. Pterosaur fossils are generally best preserved in aquatic environments such as seas, lakes, and lagoons. These animals, which flew over the water in search of fish, often fell and died, so there are many more fossils in the water sediments.

“The pterosaurs that hunted off the coast were less common, and many of their inland habitats may never be fossilized at all. A similar picture is observed with birds. If everything we know about them were gleaned from the fossils, we would probably think that birds were mostly aquatic, such as penguins, puffins, ducks and albatrosses. Although they are a minority of species, their fossil record is much broader than that of terrestrial birds such as hummingbirds, hawks and ostriches, ”concluded Longreach.