Every few tens of millions of years, an unknown and, apparently, extraterrestrial force destroys almost all life on Earth. For the last half a billion years, this has happened dozens of times; one of such catastrophes destroyed the dinosaurs, the other – trilobites. Scientists argue about the nature of this force, and about the laws that it obeys, not for the first year. Is there a new mass extinction waiting for us? There are too many answers.

In 1977, geologist Walter Alvarez brought an unusual specimen from an expedition in Italy. It was a piece of clay extracted from a rock in which a layer of clay was encased between layers of limestone. In the lower ones there were many fossils, in clay and newer layers there were none at all. The clay layer was formed 66 million years ago, at the time of the onset of one of the mass extinctions – that destroyed the dinosaurs, and not only: 75% of the species that inhabited the planet died. 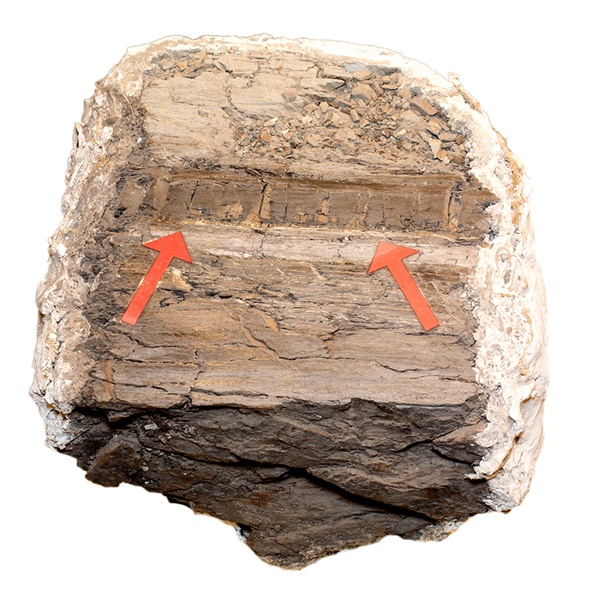 A sample of the breed, similar to the one that Walter Alvarez brought from Italy. The layer indicated by the arrows was formed immediately after the event, which provoked the Cretaceous-Paleogene mass extinction of species

Walter’s father, Louis, a physicist, also became interested in finding. Together they began to find in the piece of clay the clue of the mystery of the last extinction. In the process of working with the sample, a hypothesis about cycles was born, each of which ends with mass extinctions of species, which still serves as subjects of fierce disputes.

In a piece of clay, which was studied by the father and son of Alvarez, there was one curious feature: trace amounts of iridium. Very little, but more than you would expect. In the core of the Earth this element is, but in the bark – very little. That iridium, which is found on the surface, brings small meteorites burning in the atmosphere. Alvarez suggested that iridium and the disappearance of dinosaurs are somehow connected. One of the hundreds of working versions was the fall of a huge meteorite, which raised so much dust into the atmosphere that it obscured the Sun.

Hypothesis about the “star of death”

In 1984, Alvarez received a letter. The envelope contained an article by paleontologists from the University of Chicago David Raup and John Sepkowski, which talked about other extinctions that occurred approximately every 26 million years during at least the last 250 million years. Each of them, according to Raup and Sepkovski, erased from the face of the Earth thousands of taxonomic groups of marine living beings. Luis Alvarez checked the data and made sure that the paleontologists from Chicago were right.
A colleague of Alvarez, Richard Mueller proposed an explanation. 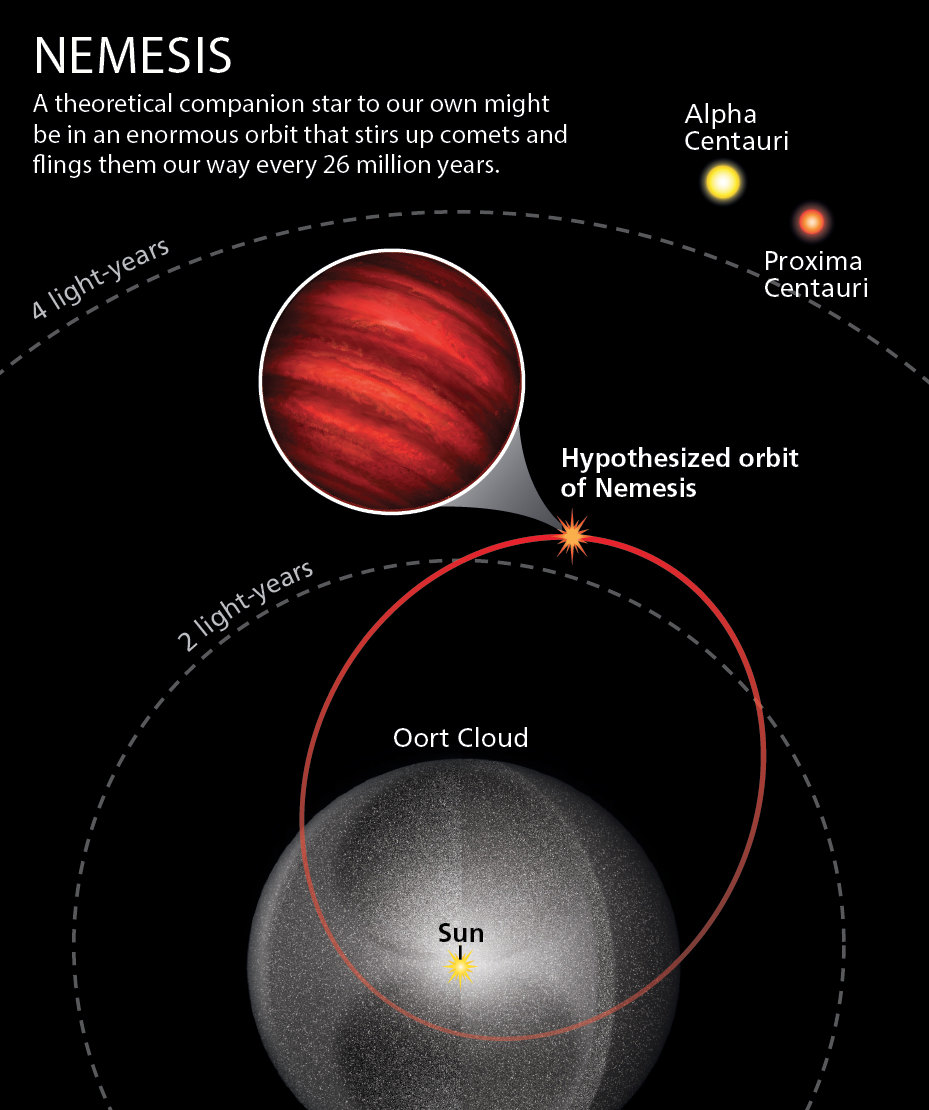 Nemesis is a hypothetical partner of our Sun in the system of a double star. According to the hypothesis, every 37 million years, its gravity sends millions of comets into the inner regions of the solar system.

According to his hypothesis, extinction was caused by a star whose orbit is such that it approaches the solar system every 26 million years. The star itself may not be very bright and dangerous, but its gravity changes the trajectory of millions of comets, directing them toward the Sun. Many of them reach the Earth. The calculations confirmed the probability of this scenario, and the scientists teamed up to find new hypotheses. The team was named “Nemesis”. After the death of Luis Alvarez, his case was continued by Müller. He and his colleagues were looking for the “death cell”.

In 2007, Mikhail Medvedev and Adrian Melott of Kansas University suggested that the cause of the extinctions that occurred every 62 million years was cosmic radiation from an unknown source, and in 2015, Lula Randall and Matthew Reese from Harvard explained the extinction with a period of 35 million years in streams dark matter. More recently, Daniel Wiltmore from Arkansas proposed an explanation for the periodically amplifying cometary flows by the gravitational impact of the mysterious ninth planet, in the existence of which, from 2016 on, astronomers are almost certain. Everyone had proof, but not one hypothesis was more convincing than the other. 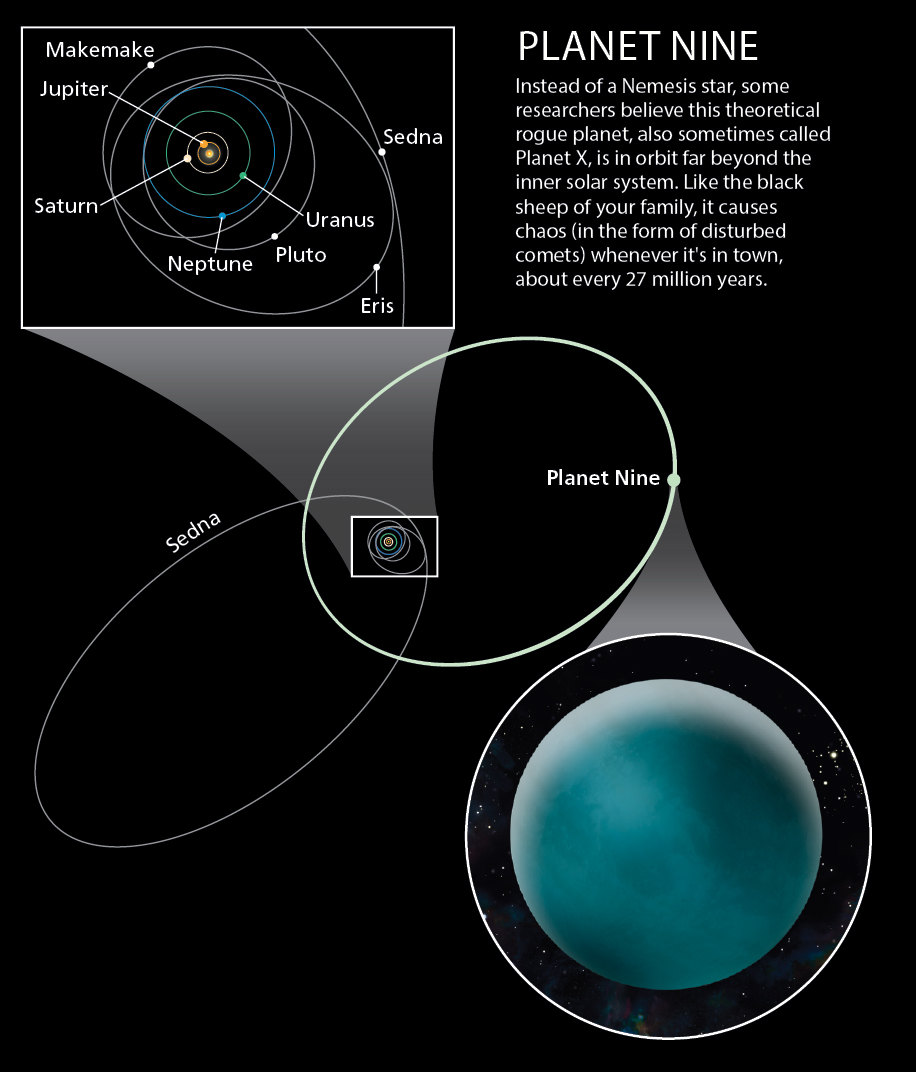 The ninth planet, whose orbit lies far beyond the orbit of Neptune, has a huge period of rotation around the Sun. Her gravity, some scientists explain the periodic powerful meteorite bombardment of the Earth, which could lead to mass extinctions.

Now most of the experts who deal with the issue of mass extinction tend to blame them not for the “star of death”, but for what is found on the path of our planetary system in its movement through the galaxy. The Milky Way then shifts relative to the plane of the galaxy, and then it elongates from its center, it approaches. In different parts of the “our” arm of the spiral, different forces act on the system, the density of interstellar matter and the amount of radiation passing through the solar system change. Sometimes conditions become incompatible with life on Earth.

Chaos instead of space

The assumption that mass extinctions on Earth in general have a periodic character, are still opponents. Corin Beyler-Jones of the Max Planck Institute for Astronomy, is going to look for patterns in the Gaia telescope data, which by 2020 should compile the most detailed 3D map of the Milky Way. But the astronomer does not count on much; he is inclined to think that his colleagues see patterns where randomness – or at least a complex system of cyclic astronomical processes controls everything.

Sometimes scientists even switch to individuals; in 2013, Bayler-Jones stated that Malott (the author of the hypothesis that every 62 million years the solar system enters the part of the galaxy where cosmic radiation destroys all life on Earth) “does not know how to interpret theoretical models.” According to Bayler-Jones, extinction can occur for a thousand reasons – because of the intensification of volcanic activity, meteorites, supernova explosions: “Everything is just very difficult,” he says to the peak of those who try to explain all the extinctions in one cyclic process.

But the arguments of Bayler-Jones persuade not everyone. His colleagues are still developing a hypothesis about dark matter – a substance that is 85% of the mass of the universe. Her movements shift the galactic center of mass, periodically directing the flow of comets toward our planet, Randall says. 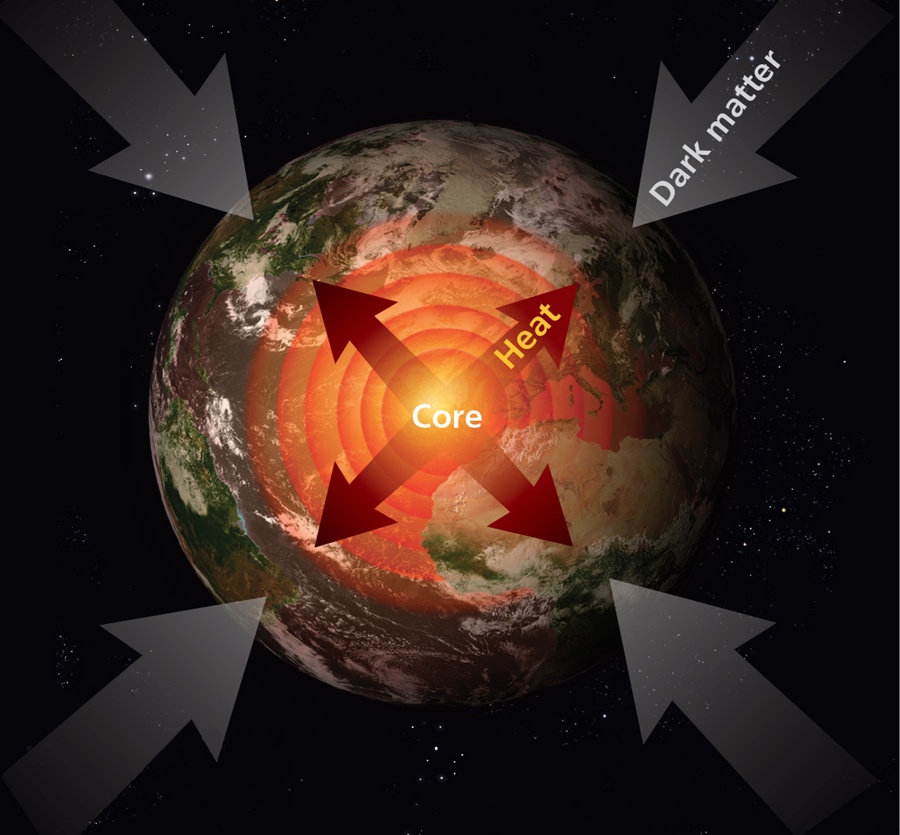 One of the hypotheses explains mass extinctions by approaching the Earth a large massive cloud of dark matter. Its gravity activates geological processes on Earth and leads to earthquakes and volcanic eruptions.

Scientists have not yet come to a common opinion about what the period of deadly cosmic cycles is, nor about their nature; converge tolko in one: extraterrestrial forces are to blame for mass extinctions. Stars are able to “set a target” for comets, cosmic radiation can seriously affect the climate, dark matter exists, the solar system flies through the galaxy, sometimes falling into dangerous places. The atmosphere did not protect us from the cosmic dinosaur threat, nor will we protect ourselves. True, as long as there is no consensus on the periods of global catastrophes, one can not make forecasts: maybe we have millions of years in reserve, or maybe not.