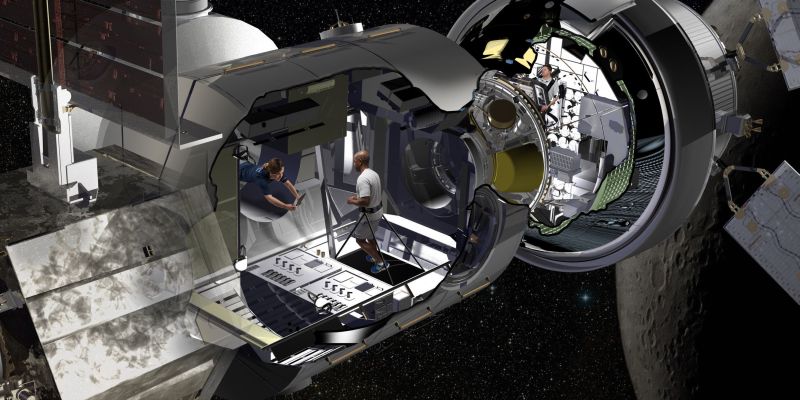 The prototype was based on one of the multi-purpose supply modules built for NASA by the Italian Space Agency (IKA) in the late 1990s. The name of the module is Donatello. It was assumed that he would handle the delivery of cargo to the International Space Station (ISS), but Donatello never went out into space. Now the company’s specialists, using helmets of augmented reality, have changed its design so that it meets the needs of four astronauts.

The shape of the module is cylindrical, its width is four and a half meters, and the length is 6.7 meters. The capsule should become a comfortable housing for cosmonauts for a period of 30 to 60 days, so the engineers turned its interior into a transformer. It accommodated a scientific installation, life support system, sleeping places, simulators and a robotic workplace.

Project Manager Bill Pratt (Bill Pratt) spoke about the vision of the team:

“Think of it as a house on wheels in space. Imagine when you live in a trailer, your desk turns into a bed, the rest of things are also constantly moving to provide you with a maximum of useful space. This is exactly what we are doing. ”

Lockheed Martin is a member of a group of six contractors, including companies such as Boeing, Sierra Nevada Corporation, Orbital ATK, NanoRacks and Bigelow Aerospace. All of them should develop their own models of residential modules by the end of 2018. For these purposes, the Space Agency has allocated $ 65 million.

The launch of the first power module is scheduled for 2022. Residential module must leave Earth in 2025. The Gateway station is intended to be used as a starting point for the expedition to Mars, which is to take place in 2033.