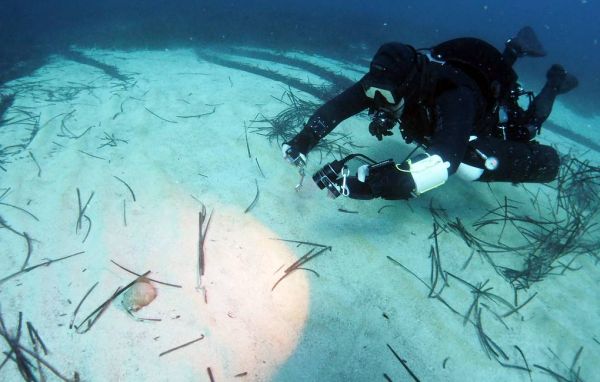 Underwater archaeologists have discovered at the bottom of the bay of Alexandria the skeleton of a warship from the era of the Ptolemaic dynasty. At the bottom of the sea, he ended up as a result of the collapse of one of the temples of Heraklion. The press service of the Ministry of Tourism and Antiquities of Egypt writes about this.

“Finds of this kind are extremely rare – we know only one fast military ship, found in the Carthaginian Marsala. Previously, we knew almost nothing about how Hellenic ships of this class were arranged,” said the head of the excavation, the head of the European Institute of Underwater Archeology ( France) Franck Gaudeau.

The Egypt of the Ptolemies was one of the fragments of the empire of Alexander the Great. This state existed from about 300 to 30 BC, when its last ruler, Cleopatra, died. The military power of the country at this time was gradually fading away, as a result of which Egypt first became a protectorate of the Roman Empire, and then turned into one of its provinces.

For two decades Godiot and his colleagues have been working on the territory of the flooded city of Heraklion, which was located on the shore of the Bay of Alexandria. Before the founding of Alexandria in 331 BC. Heraklion was the main port of Ancient Egypt.

In the II century BC. Heraklion has experienced a series of tsunamis and earthquakes. According to the Egyptian chronicles of Egypt, many of the key temples of the city collapsed because of this, and it was partially flooded. As a result, the clay base on which the port was built practically dissolved. Because of this, most of the rest of the buildings collapsed. According to archaeologists, all traces of the city’s existence disappeared under water in the 8th century.

Recently, Godio and his colleagues discovered one of the traces of this disaster – a warship, which collapsed part of the wall of the Temple of Amun. Scientists speculate that when the structure collapsed, the ship was moored or was preparing to dock in a canal along the temple’s southern wall.

As a result, the ship and all its contents were buried at the bottom of the canal under a five-meter layer of stone blocks and clay. This protected its skeleton from further destruction and looting. A preliminary analysis of the structure showed that the vessel was adapted to sail in the Nile Delta and in the channel of the river itself.

Also, scientists have discovered several blocks of the temple of Amun. Thanks to the sedimentary rocks into which these blocks fell, they have been preserved in an almost pristine state. Gaudio and his colleagues hope that the study of their findings will reveal a lot about the life of the inhabitants of Heraklion during the Ptolemaic times.