A python nearly six meters long was caught in the USA 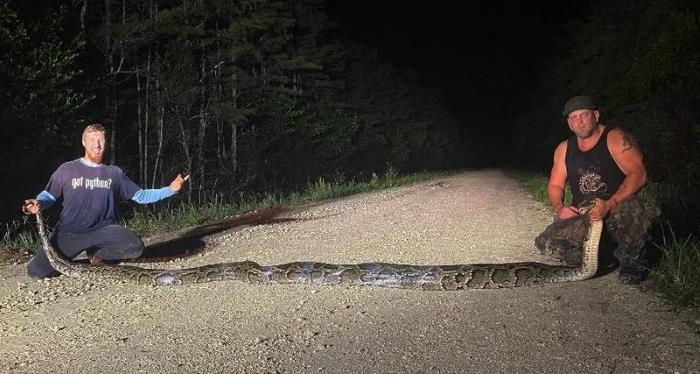 Florida hunters have captured the largest dark tiger python to date. This individual is 30 centimeters longer than the previous record holder.

Dark tiger pythons were introduced to America at the end of the last century. Conditions in this region turned out to be so favorable that now the hunters were able to catch a record-breaking individual – almost six meters!

Dark tiger pythons are the largest of all snakes. In length, they usually grow up to four meters, but sometimes there are individuals – mostly females – more than five meters long. Until now, the record for body length was held by a captive animal named “Baby”, which lived in the Serpentine Safari Park in Illinois in 2005. Its length was 5.74 meters.

However, wild pythons are usually smaller than their captive counterparts. The longest “free” tiger python ever found, measured 5.68 meters in length. Now the hunters have found a new wild record holder, 5.71 meters long, 60 kilometers from Miami. The weight of the individual turned out to be 47 kilograms – a lot even for such a snake.

Usually pythons live in southeast Asia. Traders of exotic animals could have brought them to Florida at the end of the last century. I must say that these snakes have taken root well in the conditions of American nature. In the United States, there are no natural predators that hunt pythons, and these snakes can feed on everyone – from raccoons to small alligators.