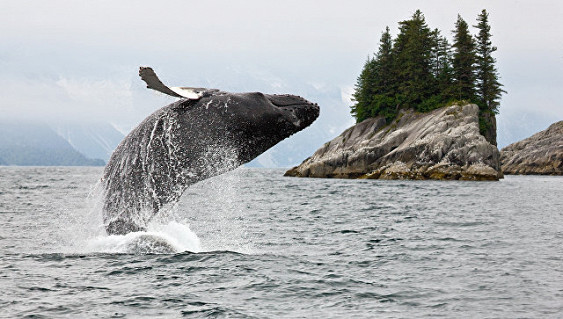 It is noted that scientists arrived in the area to conduct research at the Steller’s sea lion’s rookery. In the gulf near it, specialists discovered a cluster of humpback whales.

“Near the rookery, in the water area of ​​the Kronotsky Bay, the scientists counted twelve humpback whales, which is a rare occurrence of feeding representatives of this species.In specially protected natural areas, whales are not threatened, they come here every year to find a quiet place for rest, search And the extraction of food, “- said the representative of the specially protected area.

According to him, some whales were familiar to researchers. Previously, these marine mammals were met near the coast of the Bering Island in the Commander’s Reserve.

“Pictures on the tail fins of humpback whales are unique, like fingerprints in humans.There is a photo catalog of these marine mammals, by which you can identify the specimens,” said marine biologist Ivan Usatov.

24 species of marine mammals, including rare and vulnerable, live or temporarily inhabit the waters of the Kronotsky Reserve in Kamchatka. Among them, a gray whale, anthur and sea lions.