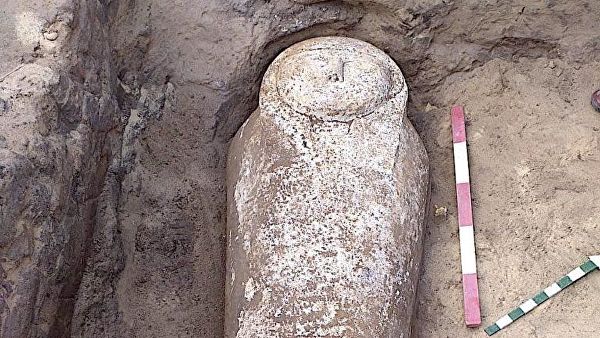 Excavations at an ancient cemetery near Cairo brought several amazing finds – Egyptian archaeologists found an “anthropoid” limestone sarcophagus, two mummies inside it, as well as several statues of deities and gold jewelry. The results of the excavation reports the Ministry of Antiquities of Egypt.

“In addition, we managed to find another mummy, which this time was hidden under a thin layer of gold leaf. It is in extremely poor condition, and now both the sarcophagus and the bodies of the ancient Egyptians were transferred to the repository for restoration and protection from further destruction” – said Mustafa al-Waziri (Mostafa al-Waziri), head of the excavation and head of the High Council of Antiquities.

All these findings were made in an ancient cemetery, found in the vicinity of the limestone quarries near the modern Egyptian city of Kesna, located 100 kilometers north of Cairo.

For a long time, archaeologists believed that this monument of ancient Egyptian history belongs to the relatively modern historical eras and contains the remains of people and the material values ​​of the Late period and the era of Ptolemaic rule in Egypt.

About a decade ago, the Egyptian Research Society scanned the northern part of the cemetery with the help of radar and found that mastabas, as well as other buildings and artifacts of the Old Kingdom, are hidden under piles of sand. As the subsequent excavations showed, they belonged to the fifth dynasty of the pharaohs and most likely were associated with the city of Atribis, the capital of one of the nomovs of Lower Egypt, and the local temple of Horus.

These discoveries revived interest in Cesna and led to the fact that systematic and large-scale excavations have been conducted on its territory for ten years. Recently, Egyptian scientists have begun to study the north-western part of the quarries, where previously archaeologists did not work.

The first excavations brought a lot of interesting discoveries – in addition to the stone sarcophagus and mummies, Waziri and his colleagues found a lot of ceramic jewelry, vases, golden scarab and some other gold jewelry, ritual canopic vessels for storing bodies of the deceased, “magic” amulets and other ritual objects.

The canopic caps, as the scientists note, were performed in the classical manner of the New Kingdom, a later era in the life of ancient Egypt. They were decorated with images of the head of one of the three “sons of Horus” – the jackal Duamutef, the baboon Hapi and the falcon Kebehsenuf.

Each of these vessels kept a specific organ of the pharaoh or other noble persons, reflected one of the aspects of their essence and protected, as the legends of Ancient Egypt, their owner, said during his journey to the afterlife.