A scientist has patented violate the laws of physics engine 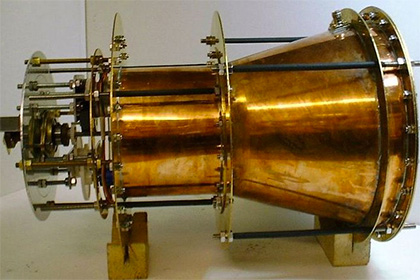 Briton Roger Scheuer, the inventor of the EmDrive engine, patented a new version of the unit. The device has still not received an explanation within the framework of conservation laws.

Patented Scheuer modification EmDrive differs from previous versions of the unit the presence of a pair of superconducting plates. According to the scientist, this reduces relative to an outside observer the change in the frequency of the electromagnetic wave during its propagation in the cavity of the engine and thus to increase the thrust of EmDrive.

Engine EmDrive is a device of a magnetron (microwave generating) and resonator (accumulating the energy of their oscillations). Externally, the unit resembles a put on the side of the bucket. This design allows, according to Solera, to convert the radiation into thrust.

Develop EmDrive thrust is of the order of a fraction of a micronewton or millinewton. From the cavity of the engine when the work is not fixed emission of photons or other particles, which would explain the possible appearance of traction and the implementation of the law of conservation of momentum.