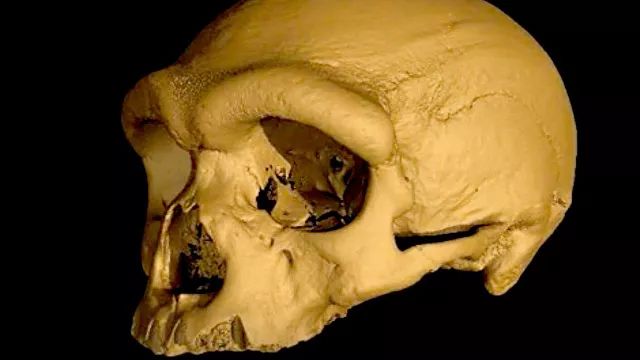 Anthropologists who have studied a fossil known as the Harbin Skull, housed in the Geosciences Museum at Hebei University in China, believe they have discovered a new species of ancient man that is closer to Homo sapiens than Neanderthals. The research results were published in three articles in The Innovation (Article 1, Article 2, Article 3).

The skull, found in the 1930s near the city of Harbin in the Chinese province of Heilongjiang, is the largest skull of an archaic people ever discovered. According to scientists, it could accommodate a brain comparable in size to the brain of a modern person. But the rest of its features – almost square eye sockets, thick brow ridges, wide mouth and large teeth – differ from both Homo sapiens and Neanderthals.

“The Harbin fossil is one of the most complete ancient human skulls in the world, retaining many morphological details that are critical to understanding the evolution of the genus Homo and the origin of Homo sapiens,” according to a press release from Cell Publishers, first author of an article, Qiang Ji (Qiang Ji), Professor of Paleontology, Hebei University “The Harbin skull, although it exhibits typical archaic features, is a mosaic combination of primitive and derivative features that is distinct from all other previously known species of Homo.”

Scientists have named the new species Homo longi from the Chinese long – dragon. Using a series of geochemical analyzes, the authors determined the age of the fossil to be about 146,000 years. Also, according to the composition of the bones and surrounding sediments, scientists found that the skull belonged to a man of about 50 years old, who lived in a small community in a forest floodplain.

“Like Homo sapiens, they hunted mammals and birds, gathered fruits and vegetables, and possibly fished,” said study author Xijun Ni, professor of primatology and paleoanthropology at the Chinese Academy of Sciences and Hebei University.

Taking into account the large size of the skull and the fact that it was found in the northernmost province of China, the authors suggest that Homo longi, most likely, was adapted to the harsh climatic conditions, could well have settled throughout Asia and, perhaps, even intersected with the earliest representatives of Homo sapiens.

“The Harbin Skull gives us more evidence for the diversity of Homo and the evolutionary relationship between species and populations of ancient humans,” says Professor Ni.

The authors note that in terms of its morphological features, the “dragon man” is closer to Homo sapiens than the Neanderthals.

“It is widely believed that the Neanderthal belongs to an extinct lineage of closest relatives of our own species. However, our discovery suggests that the new lineage we have identified is in fact a sister group of Homo sapiens,” Nee notes.

Proceeding from this, perhaps, the scientist believes, modern people moved away from the Neanderthals much earlier than they thought until now.

“The timing of the divergence between Homo sapiens and Neanderthals in evolutionary history may be deeper than commonly believed – perhaps more than a million years ago,” the professor concludes.