A snapshot of a rising earth that changed history 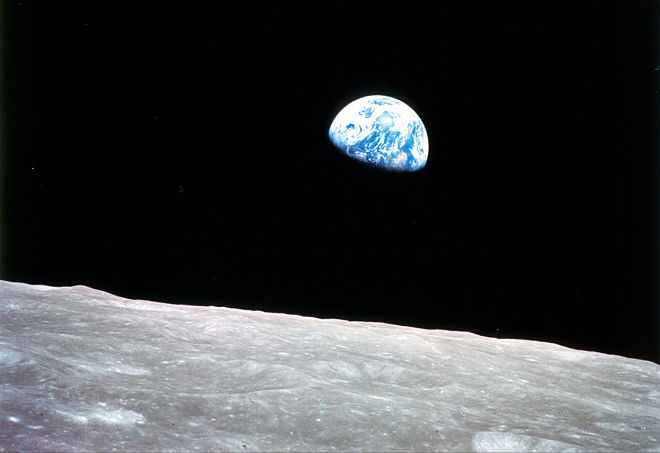 In 1968, the Apollo 8 spacecraft orbited the moon, and the astronauts on board photographed landing sites for future missions. In the fourth orbit, commander Frank Borman needed an adjustment of the observation, and he decided to turn the vehicle away from the moon, tilting its windows to the horizon. As a result, the astronaut opened an unexpected view of the Earth.

Crew member Bill Anders pointed the camera at the planet, taking perhaps the most legendary photograph in the history of mankind. Later, Borman said that it was the most beautiful and touching look in his life, which caused a flood of nostalgia, complete homesickness, which overwhelmed him. It was the only multi-colored object in space. Everything else was black and white. But not the Earth.

The boundaries of nature’s endurance have become visible: a blue and white shimmering egg hanging in a monochrome void. Anyone could see it spinning, wonderfully alive in the midst of an endless vacuum.

When we think about the Apollo missions, we often emphasize NASA’s technical advances. But another most important achievement of decades of space exploration was this photo taken 50 years ago. 15 months after the picture was taken, the first Earth Day was held, the unofficial flag of which was this image. The event brought to the streets 20 million Americans – a tenth of the country’s population at that time.

Now, after half a century, the picture is still relevant. From a cosmic perspective, you can see how the Earth has changed: the ice cover of the Northern Hemisphere has become two times smaller, some of the islands of the Pacific Ocean have disappeared in the ocean, the forests that covered South America and Africa are cut down.

Our salvation is to look again at this photo and realize that we live here and will live here forever.