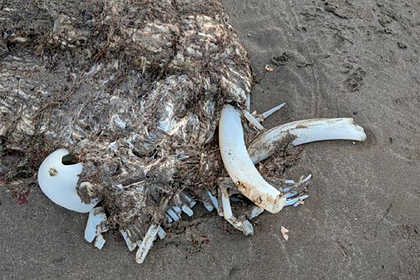 The mysterious dead “monster” washed ashore in the British county of Pembrokeshire, Wales. According to the information portal WalesOnline, the find puzzled specialists.

On December 17, Julie LaTrobe was walking along the coast and noticed something with bones and fins. Apparently, the remains belonged to a sea animal. “It was an unusual find, we shook the remains to find out who they might belong to. There was something like a fist-thick vertebra, ”she says.

LaTrobe noted that the carcass did not have a head, but a pelvis and something resembling fins were visible. “It didn’t look like bone, rather like cartilage – much paler and more elastic,” the British woman explained.

Netizens suggested that LaTrobe stumbled upon the remains of a shark, seal or even a sheep. Experts at the marine mammal rescue charity British Divers Marine Life were unable to determine for sure what the animal was. They also believe that a dead dolphin, porpoise or seal may have been washed ashore.

Earlier it was reported that the remains of a mysterious creature were found on the Greek island of Crete. They were found on the northern coast of the island after a severe storm that lasted for several days. It resembles a small hippopotamus: it has four legs and no hair.