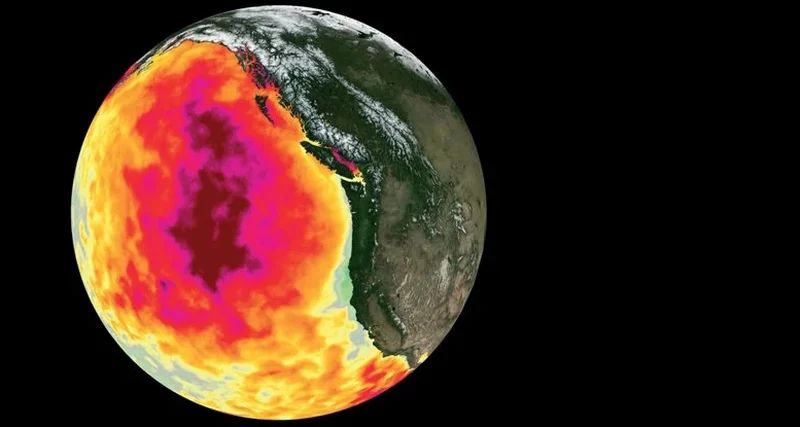 Scientists have found that due to global warming, areas of hot water appear in the waters of the World Ocean, due to which hundreds of thousands of living beings die and ecosystems are destroyed.

In 2013, a strange bubble of hot water appeared in the Pacific Ocean off the coast of North America. He then destroyed the marine life in the region.

Thousands of seabirds were washed ashore, along with hungry sea lion cubs. Salmon, krill and other marine animals disappeared as the heat triggered a massive bloom of toxic algae that also stopped the crabs fishery.

Fish spawning has also been disrupted, and some subtropical species such as swordfish and pyrosomes have expanded far beyond their normal range. The cataclysm is believed to have killed more than 100 million Pacific cod.

At the peak of the temperature, parts of this droplet heated the water 4 ° C above normal, and the abnormal heat pocket persisted until 2015. This figure may seem small, but the consequences of such heating were disastrous.

Since then, even more monstrous droplets of hot water have formed in oceans around the world, damaging ecosystems and fisheries, and canceling decades of efforts to rescue humpback whales, which have declined by 30%. The heat currents have also caused massive coral bleaching, melting sea ice and the release of carbon dioxide from dying algae.

Environmental physicist Charlotte Laufketter of the University of Bern in Switzerland and her colleagues studied sea heat bubbles recorded between 1981 and 2017. They found that the 300 largest events of this kind lasted an average of 40 days, covered an average of 1.5 million square kilometers and reached a maximum temperature of 5 ° C above average.

By focusing on the seven largest and freshest bubbles, the researchers calculated if they could have formed in an environment where there is no global warming. Their analysis showed that at present the probability of the impact of heat fluxes on the sea is more than 20 times higher due to anthropogenic climate change.

Before our pollutants began to affect the Earth’s thermostat, such large and intense sea heat waves occurred only once every several hundred or even thousands of years. The researchers’ model suggests that once we reach a global warming level of 1.5 ° C, such events could occur in the worst case every decade; at around 3 ° C, they may become annual.

Because these “droplets” of hot water significantly affect marine life, the researchers found a huge and ongoing shift in the food chain of the affected regions – much less nutritious gelatinous zooplankton began to appear instead of nutrient-rich plankton, which is likely to have serious consequences. throughout the food chain. And many regions that fell victim to the disaster will never recover.