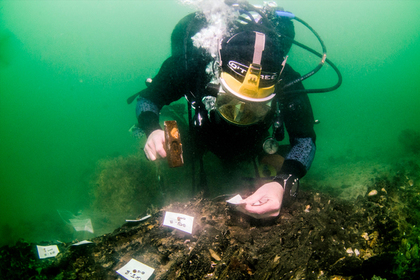 Specialists at the Marine Archaeological Foundation in the UK have discovered an ancient technology that is thousands of years ahead of time. This was reported in a press release from the National Oceanographic Center.

Experts found a wooden platform eight thousand years old east of the city of Yarmouth on the Isle of Wight. It is located at a depth of 11 meters, but in antiquity, when the Isle of Wight was connected to the mainland, there was land with lush vegetation. The platform is composed of several layers of processed logs and rested on a horizontally located foundation.

According to scientists, they found evidence of ownership of advanced wood processing methods that were thought to have appeared after millennia. The platform is dated by the stone age, which began about 12 thousand years ago and lasted until 6500-1200 years BC.

Earlier, on August 21, it was reported that an international group of scientists had questioned the high level of development among Neanderthals. They showed that obtaining glue from birch bark, which they knew how to make paleoanthropes, is a simpler technical process than the researchers thought before.