Along the coast of Mallorca found a sunken ancient Roman ship 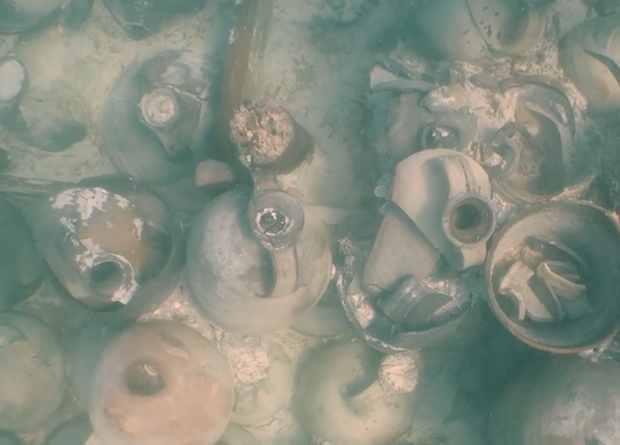 Spanish researchers discovered in the Mediterranean Sea off the coast of Mallorca a sunken ancient Roman ship of the 3rd century AD. Presumably, the vessel transported wine, garum fish sauce and olive oil from the south of the Iberian Peninsula, the Balearic Islands Institute of Marine Archaeological Research said on its Facebook page.

In the VIII century BC, the Phoenicians landed in Mallorca and founded several colonies on it. For a long time the island was ruled by Carthage, but after the Second Punic War the state lost almost all of its possessions. In 123 BC, the Balearic Islands, including Mallorca, were conquered by the Romans. At that time, the inhabitants of the archipelago were engaged in piracy, and the Romans wanted to secure a safe sea route between the Iberian Peninsula, which mined gold, silver, lead and tin, and also grew wheat, olives, grapes and fish, and the Apennine Peninsula, on which ( in addition to other parts of the republic, and then to the empire), all this was supplied. In addition, between the two peninsulas warships that carried soldiers.

In July 2019, residents of Palma (the capital of Mallorca) noticed fragments of ceramics at the bottom of the Mediterranean Sea. They were interested in archaeologists from the Institute of Marine Archaeological Research of the Balearic Islands (Instituto Balear de Estudios en Arqueología Marítima). Scientists explored the finds and discovered the remains of a Roman cargo ship built in the second half of the 3rd century AD, and more than a hundred well-preserved amphorae. The vessel was about 10 meters long and about 5 meters wide.

According to the researchers, the ship sailed from the south of the Iberian Peninsula with a load of olive oil, wine and garum – fish sauce, which the Romans considered a delicacy. Archaeologists do not specify how they determined the contents of the amphoras, but the Daily Mail publication in its note claims that such a conclusion could be drawn from some inscriptions on the vessels.

Apparently, the ship sank not as a result of a storm, as evidenced by the excellent preservation of amphoras. Now they are washed from sea salt, after which they plan to examine the containers themselves and the remains of their contents.

A few years ago, archaeologists found in the Ligurian Sea another Roman transport vessel that transported garum and wine from Spain to Rome. On it were vessels of a special type, which were used exclusively for transporting fish sauce.