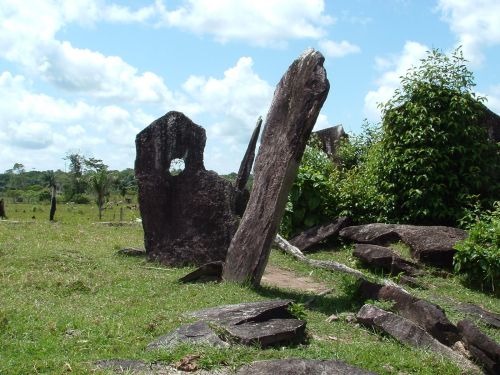 Difficult stone constructions aren’t too widespread in rainforests of Brazil therefore they for a long time sink down in memory that who incidentally finds them. Has so happened to Laylson Kamelo da Silva, being the operating ranch. Da Silva has found “the Amazonian Stonehenge” in the 1960th during hunting for wild pigs in the Brazilian municipality of Kalsueni and didn’t make a find public till 1990.

“The place initially seemed sacred as though here it is impossible for people — Silva says Yes. — But it was impossible to pass him during urgent deforestation in the 90th years when trees mainly burned”.

Since then Mariana Kabral from Federal university of Minas Gerais and her colleague conducted excavation in this area and have found splinters of pots and funeral ballot boxes. Kabral has also pointed a part of the neighboring river where it was possible to find stones from this ancient monument to a part.

Kabral considers that stones were something like calendar and astronomical observatory as Stonehenge in England. This place in Brazil existed one thousand years ago before Europeans have got on coast of South America. The place was also used for the rituals connected with a solstice.

Existence of stones brings up other question which often sets Da Silva who serves as the keeper of a historical monument now: “What other secrets of our past still disappear in the jungle of Brazil?”