Amoeba “ate” a teenager’s brain after swimming in a lake 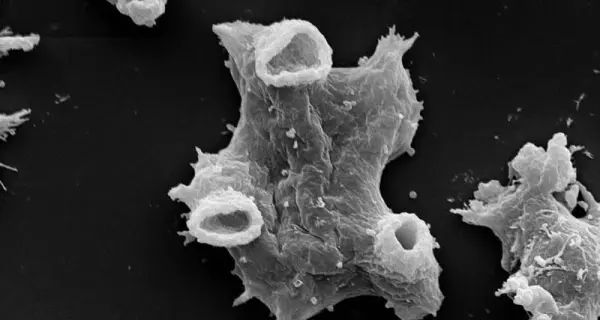 Tanner Wall, 13, and his family recently camped in North Florida. On the territory of the camp there was a water park and a lake where the boy went to swim. It is reported by the local edition News4Jax. A few days after swimming in Lake Tanner, she began to vomit, vomit, headaches and neck muscles stopped responding to external stimuli.

At first, the boy was diagnosed with regular pharyngitis, but the parents suspected a more serious condition and took the child to the UF Health Medical Clinic in Gainesville, Florida. There, the teenager was placed in a drug-induced coma and connected to a ventilator. Re-examination showed that the problem was not pharyngitis.

Doctors found that the teenager’s brain was struck by the amoeba Naegleria fowleri. This insidious microorganism lives in warm fresh waters, usually in lakes or rivers. It is most commonly found in southern regions after a long period of heat. If the contaminated water is swallowed, then nothing terrible will happen – the amoeba will not enter the body. However, if the microbe enters the nose, it will have a pathway to the brain, where it can multiply and feed on brain tissue until the infected person dies.

Infection with this amoeba almost always leads to death. The survival rate for this diagnosis is about 3%. It is known that in order to survive after infection with nigleria, it is necessary to identify the infection as early as possible and begin to treat the patient with the experimental drug miltefosine. The case of Naegleria fowleri infection was described in two episodes titled “Euphoria” of the House series. However, although this infection is dangerous, it is rarely diagnosed. Over the past 10 years in the United States, doctors have recorded only 34 cases of nigleria infection, despite the fact that millions of people swim in the water every year.