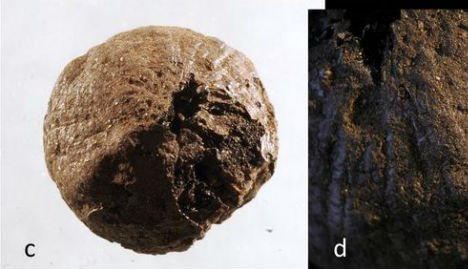 A charred bulb over 1.5 thousand years old can shed light on the development of trade relations between the so-called “Swedish Pompeii” and the Roman Empire, reports The Local.

The bulb was found in Sandbi Borg on the island of Öland in the Baltic Sea. Earlier in the same place, scientists discovered two gold rings and a Roman coin of the 5th century. According to archaeologist Helena Victor, it is clear that local residents imported vegetables.

Onion in Scandinavian cuisine was not used, but it was widely used in the Roman Empire. The bulb was found near the remnants of the fireplace during the study of the house on the territory of the round fort.

The bulb was given for analysis in the Swedish Historical Museum, where it was confirmed that this is indeed a bow – the oldest onion found in Scandinavia. The researchers dated him the end of the 5th century. AD Previously, in Bornholm, scientists have already found onions, but this vegetable dated 650 years. AD

The settlement at Sandby Borg ceased to exist in the 5th century, when its inhabitants were killed. The reason for the mass murder is still unclear.

The fact that the local population had trade ties with the Roman Empire, scientists have no doubts. According to the researchers, the nearest Roman settlement to Eland was Noviomagus, now the city of Nijmegen. However, where exactly could be brought onions, while it remains unknown.