An ancient sea monster is found in India 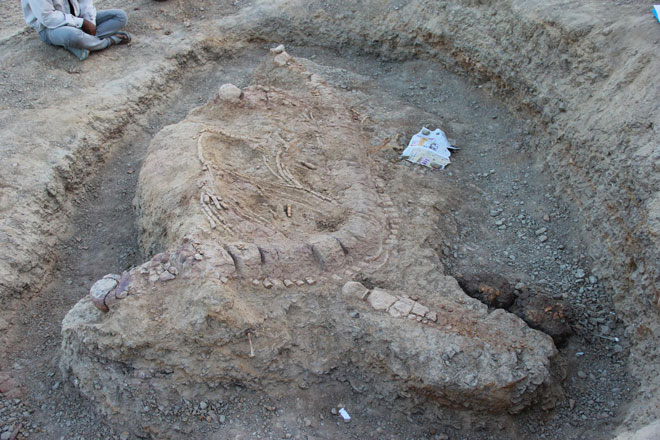 The fossils recently discovered in northwestern India represent a well-preserved skeleton of ichthyosaurus – a marine reptile floating in deep dark waters over 150 million years ago. These animals were dolphins or whales of their time: they ate fish and had flexible bodies with large eyes, narrow jaw and cone-shaped teeth.

A fossil find will help paleontologists better understand the evolution and distribution of ichthyosaurs in the ancient world. “Most of their fossils from the northern continents, in the south, they are very rare. This is a fantastic discovery and certainly the best ichthyosaurus skeleton ever found in India, “said Steve Brusatta, a paleontologist at Edinburgh University.

Indian paleontologists discovered remains south of the village of Lodai, in the province of Gujarat, in 2016. Ichthyosaurus was included in an extremely hard sedimentary rock, but after long hours of excavation in a grueling heat, the team finally extracted a stunningly preserved skeleton. The spinal column of the reptile was still almost an unbroken line, and its left anterior margin was the same as during life.

Guntupalli VR Prasad, a paleontologist from the Indian University in Delhi, studying vertebrates of the dinosaur era, says that the find was a big surprise. Not only is the fossil the most complete Indian ichthyosaur, it also refers to the Jurassic period. All previous fossils are 50 million years younger and consist of only individual teeth or poorly preserved vertebrae.

In the time of ichthyosaurus, this region of India was covered by a tropical sea, whose expanses a 5-meter reptile furrowed in search of food. His cracked and worn teeth mean that he was eating tough prey, such as armored fish and ammonites, cephalopods with a swirling shell, similar to today’s nautilus.

The team also found that the Indian ichthyosaurus is closely related to the members of the group whose remains were found far north, which indicates the widespread distribution of sea monsters. Combined with data on invertebrate fossils, the discovery suggests that once a huge sea route crossed the ancient supercontinent of Gondwanaaland, passing through lands that are now divided into western India, Madagascar and South America.