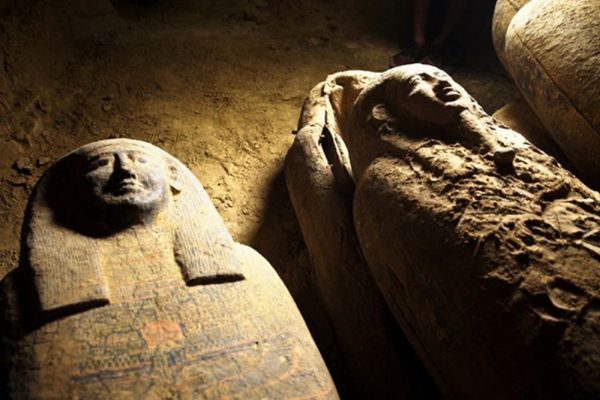 An archaeological mission of the Egyptian Ministry of Antiquities, while excavating in Saqqara, discovered an ancient cache containing more than a dozen anthropomorphic intact coffins.

A short account of the discovery is published on the website of the Egyptian Ministry of Antiquities. It follows from it that the find was made in the ancient city of Sakkara. In total, the researchers found 13 intact and sealed coffins.

Anthropomorphic sarcophagi were found in a mine 11 meters deep. Inside it, scientists came across three sealed niches. The sarcophagi are about 2500 years old. They are very well preserved and even still retain some of their original colors.

It is noteworthy that the sarcophagi were neatly stacked on top of each other. This indicates that in ancient times they were moved from other tombs. For ancient Egypt, this was common practice. The priests often carried the coffins of important people into caches known only to them in order to protect them from tomb robbers.

Initial research showed that in their entire history, the discovered sarcophagi have never been opened. This is a great success for researchers. In addition, additional surveys have already been announced. Scientists are sure that there may be other sarcophagi in the mine.

The head of the archaeological mission in Sakkara, Mustafa Vaziri, noted that the identity and titles of the owners of the coffins have not yet been determined. However, scientists believe that it will be possible to establish this in a few days, given the good preservation of the finds.