Ancient fish has opened secrets of evolution of a jaw 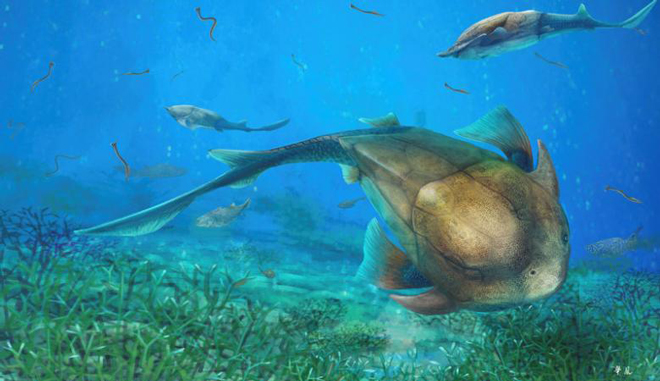 Armor-clad fish who was dug in in silt at the bottom of the tropical seas 423 million years ago changes idea of evolution of the vital anatomic element — a jaw.

Scientists have reported that they have dug out in the Chinese province of Yunnan fossilized remains of ancient fish under the name цилинюй a rostratra. Prehistoric fish reached 30 cm in length and possessed bones which are present at modern jaws of vertebrata, including people.

Qilingyu belonged to the died-out group of fishes under the name of a plakoderma, or armor-clad fishes. Representatives of this group have been chained in bone armor which covered the head and the most part of a body. Praised jaws have been decorated with bone plates which fishes used as teeth to cut to pieces production.

At цилинюй there were three bones — the lower maxillary bone, the top jaw and an intermaxillary bone which are characteristic of bony fishes, of amphibians, reptiles, birds and mammals, but cartilaginous sharks and slopes don’t have them.

Scientists long time of a rassmatriala of plakoderm as example of the evolutionary deadlock. But okmenely remains цилинюй and other armor-clad fish of an entelognatus who also possessed three bones specify that elements of a modern jaw have for the first time appeared at plakoderm. The top jaw, an intermaxillary bone and a bone of the lower jaw evolved from bone plates which plakoderma used to undress production.

Results of a research contradict the settled idea that the architecture of a modern jaw has developed later, at early bony fishes.