Ancient global warming was accompanied by rains and floods

Modeling the climate of global warming, which occurred 55 million years ago, climatologists found that it was accompanied by abundant and frequent showers, which significantly changed the relief of the continents and coastal ecosystems.

Previous global warming (PETM) – Paleocene-Eocene thermal maximum, provoked by a sharp change in the composition of the atmosphere – lasted several thousand years and led to noticeable changes in the Earth’s climate and the extinction of thousands of species of animals and plants. This event is of particular interest to researchers, since it largely resembles the climate change of the planet, which we observe today. Paleocene-Eocene warming is often modeled, there are fairly accurate estimates of the dynamics of average annual temperatures. 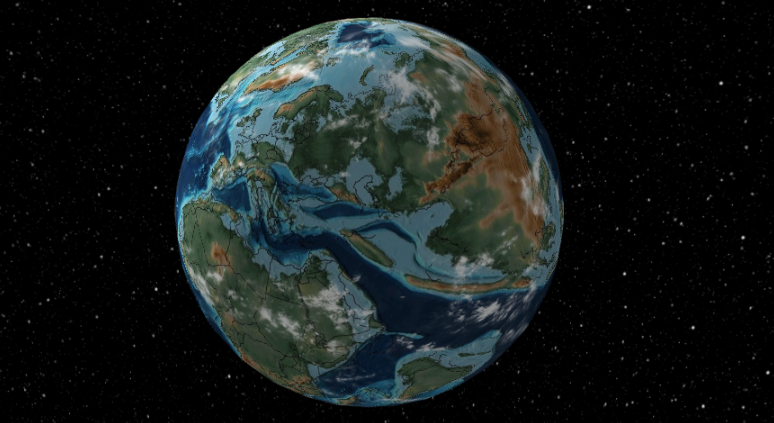 Earth on the eve of the Paleocene-Eocene thermal maximum. Ancient Earth Globe.

Less research is devoted to the study of the change in precipitation map during PETM. A new work of climatologists from the University of Bristol pointed to the unexpected features of the hydrological cycle of PETM. Earlier it was known that during warming some of the humid regions turned into deserts – and vice versa: there was more precipitation over previously rather dry areas of the land. However, Bristol climatologists showed that over the greater part of the planet at this time there were abundant, but brief downpours. The results of the simulation are published in the journal Earth and Planetary Science Letters.

The study’s head, Matt Carmichael, says: “Using the same climate models used for forecasting, we checked how the increase in carbon dioxide concentration would affect the planet with the geography of the Eocene beginning.” The simulation has been expected to show that the addition of carbon dioxide increased the amount of precipitation in the whole of the planet – warm air retains more moisture than cold. In addition, it was found that the warming changed both the intensity and the frequency of precipitation (the frequency of recurrence is a characteristic of how often rains of a given intensity fall): “The tropics became even more humid, in some regions the frequency of extreme showers increased by 70% – explains Carmichael.

Warming has changed the nature of soil erosion and migration of sedimentary rocks – and the landscape of the planet. The rivers, which in the cold and dry climate carried silt and sand, were filled with water of frequent and intense rains and began to carry large pebbles and boulders. At the surf zone, more sedimentary rocks began to accumulate in the places where the rivers flow into the seas and oceans. These processes provoked the contamination of coastal waters by organics, which in turn led to a rapid growth of algae and oxygen deficiency. The authors of the study believe that modern global warming can lead to an increase in the amount of precipitation, transport of sedimentary rocks to the coasts of the seas and oceans, and the subsequent flowering of water. “It is likely that this model shows our future: downpours, floods, turbulent rivers, soil erosion and flowering of water,” says one of the study’s authors Rich Richston (Rich Pancost).