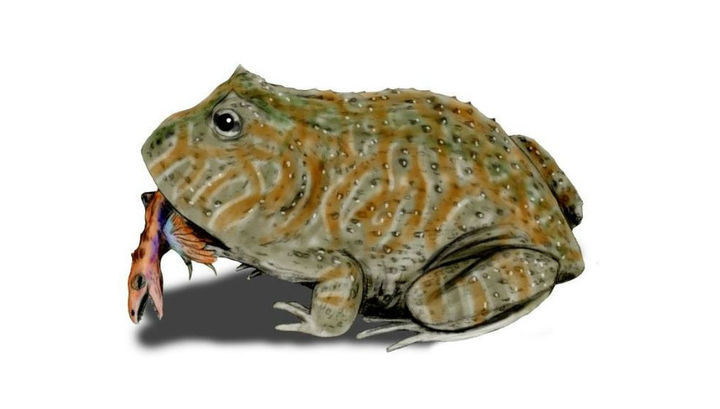 Frogs are difficult to imagine in the form of terrible predators, because most of them feed on insects, their larvae or small crustaceans. But in the distant past, the ancestors of modern kvakushek could terrify much larger animals.

Today, the world’s largest frog-goliath, reaching three kilograms, can catch small rodents and amphibians. But it also fades against the background of the fossil devilish frog Beelzebufo ampinga, which inhabited the island of Madagascar 68 million years ago. Even from the same name “velzebuffo”, formed from the Latin words “Beelzebub” (Beelzebub) and “Bufo” (toad), goose bumps run down your back.

Scientists have long suspected that with a body length of over forty centimeters and a weight of about four and a half kilograms, this creature could eat dinosaur cubs. And now this hypothesis has received new confirmation.

The international team of biologists conducted a series of experiments with modern relatives of the welsebub-horned frogs, who were already participating in the experience of measuring the strength of the language. As a result, the researchers calculated that the power of the bite of the welsebuffo is comparable to the jaws of large predators, such as wolves and even female tigers.

“Unlike the vast majority of frogs, which have weak jaws and usually eat small prey, horned frogs ambush animals of the same size as themselves, such as other frogs, snakes and rodents, and their powerful jaws play a decisive role in capture the victim, “- says study leader Mark Jones (Marc Jones) from the University of Adelaide.

This time, scientists measured the strength of the bite with the help of two skin-covered plates, which brought to the muzzle of horned frogs, provoking an attack. It turned out that relatively small specimens with a head width of about 4.5 centimeters, compress the jaws with a force of 30 newtons.

By calculations, Jones and his colleagues deduced the dependence of the strength of the jaws on the size of the head and determined that the largest modern frogs living in the tropical and subtropical forests of South America bite with force about 500 newtons, which is comparable to predatory reptiles and mammals having similar dimensions of the skull . According to the authors of the work published in the journal Scientific Reports, this can be compared with a fifty-liter barrel of water, which was put to the person on the finger.

Comparing the features of the structure of the skeleton wielzebufo with its modern descendants, the team estimated the strength of its bite in an incredible 2200 Newtons. This is more than enough to grab the small dinosaurs, who were not lucky enough to be close to the devil’s frog.