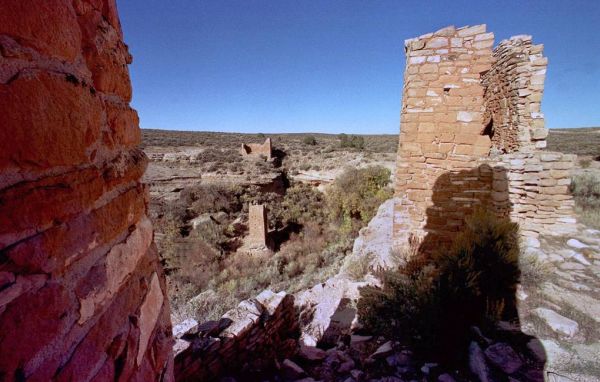 American archaeologists have found that ancient Indians living in the southwestern United States coped with water shortages during droughts by melting ice that has been preserved in alpine caves and lava tubes since the Ice Age. This was announced on Wednesday by the press service of the University of South Florida in Tampa (USA) with reference to an article in Scientific Reports.

“I studied many lava tubes, but Cave 29 immediately caught my attention because of the huge amount of coal that covered the floor in the back of the cave. I immediately found it interesting, but we discovered the connection between these traces of fire and that that the Indians extracted water here only after they found traces of ash inside the ice deposits themselves, “said Bogdan Onak, a professor at the University of South Florida, quoted by the university’s press service.

The culture of the Pueblo Indians is considered one of the oldest civilizations in North America. It arose about 3 thousand years ago and its representatives switched to a sedentary lifestyle around the first millennium BC, which radically distinguishes the pueblo from other North American Indians.

Their settlements gradually grew in size and were comparable in scale to large European cities by the time Columbus arrived in the New World. By this time, in the valley of the Rio Grande there were several hundred settlements, some of which were small villages, while others were fairly large cities with several thousand inhabitants.

During the entire existence of this civilization, the southwestern regions of the United States, where its settlements were located, experienced many droughts, some of which lasted for several years. The discovery of traces of these climatic disasters makes archaeologists and paleoclimatologists constantly debate how the Pueblo villages have managed to survive such periods of water shortages.

Cave “refrigerator” of the ancient Indians

Professor Onak and his colleagues have discovered a possible explanation for how the Pueblo Indians managed to survive these droughts by excavating lava tubes, cavities in rocks generated by the movement of magma flows. They are often found in the mountains in the west of present-day New Mexico and elsewhere in the southern United States.

Many of these caves contain significant reserves of ice, formed during the Ice Age or during the so-called Little Ice Age, a period of relatively cold climate in the 16th-19th centuries. By studying these caves, climatologists are trying to reconstruct the climate of those eras when these ice reserves were formed or melted, including the time of the existence of the Pueblo civilization.

Archaeologists and climatologists from the University of South Florida have made an unexpected find, conducting similar measurements in one of these lava tubes, temporarily named “Cave 29”. Studying the sedimentary deposits at its bottom, they discovered a large amount of ash, coal, and crockery shards, made in a tradition popular among the Pueblo Indians in the 1st-9th centuries AD.

When scientists removed ice samples from about the same era, they found inside them many ash particles and other traces of fire burning in the vicinity of the ice deposits. This prompted them to think that the Indians did not just spend the night in the cave, but used it to obtain drinking water for several centuries.

This is supported by both the large amounts of coal in the sediments at the bottom of the cave, and the fact that the layers of ice where Professor Onak and his colleagues found ash particles formed at the same time as in New Mexico and other regions in the south -the west of the modern USA was dominated by prolonged droughts.

Further study of these ice deposits, which are rapidly shrinking today as a result of global warming, will help scientists assess how much water the Indians have extracted in this way, as well as what role these moisture reserves may have played in their lives, the authors of the article concluded.