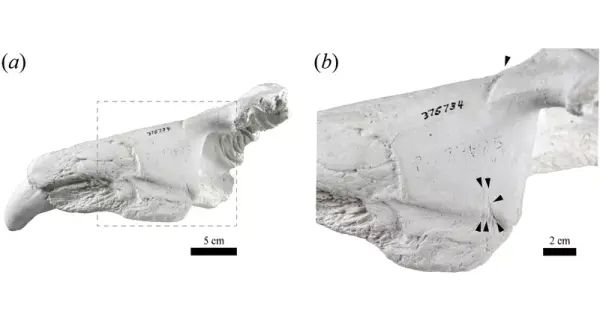 Scientists are trying to understand whether the remains got there naturally or is it the result of human activity.

To be more precise, the unusual jaw was found back in 1965. It was unearthed by construction workers on the banks of the Wabash River in the US state of Indiana. After some time, the find ended up in the Natural History Museum in Chicago, where, using radiocarbon analysis, it was dated to 1260 years old, cataloged, but not identified.

Now, a group of American and British scientists led by Ana Valenzuela-Toro re-examined the jaw and identified it as belonging to a male southern elephant seal (Mirounga leonina) living in Antarctica. These animals are known for their ability to swim long distances in search of food and sometimes they even reach the coast of Baja California, but rarely swim further north. Therefore, the key research question was how the elephant seal’s bone could get to the Wabash coast.

The most likely, according to the Valenzuela-Toro group, is the version that the animal swam along the coast of South America to the Gulf of Mexico, from there to the Mississippi river system, and then, probably, to the territory of today’s Indiana, where it ran aground and was killed by local residents. On the jaw, scientists found marks that look like traces of weapons, and they fully admit that a person was involved in the case.

Less likely, but possible, the study authors believe that the jaw was brought to North America from South America along trade routes. Moreover, the tribes inhabiting the Mississippi coast were known for their long-distance trade. However, only bones of great value, for example, individual canines, were washed away at such a distance.

In addition, although the authors are confident in the correctness of their identification, they nevertheless admit that the jaw could also belong to a northern elephant seal that lives on the west coast of North America. But even in this case, the journey of the animal, if the bone got to Indiana naturally, was not at all easy. The sea was supposed to sail the continent from the north through the Arctic, and then descend to the south and enter the river system either in the Gulf of St. Lawrence, or in the same Gulf of Mexico. It is possible, however, that the elephant was killed on the west coast and then its bones were taken to the Mississippi region, but in this case, as scientists note, there must be other similar finds, but so far this jaw is the only one of its kind.