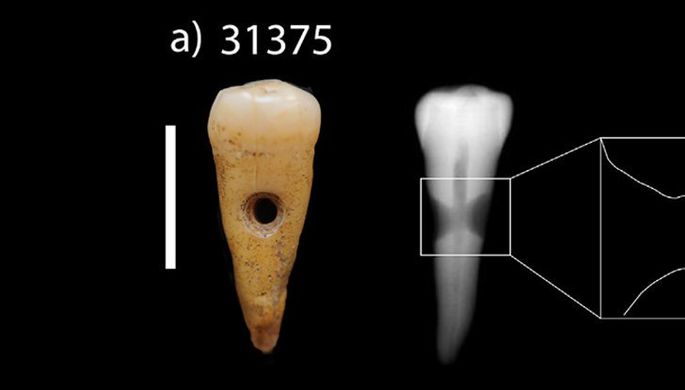 In Turkey, discovered human teeth of the Neolithic era, which were used for decorative purposes. Ancient people wore them as jewelry. A study by an international group of archaeologists is published in the journal Science Direct.

On the territory of the ancient Neolithic settlement Chatal-Hyuk in western Turkey, archaeologists often found decorative elements from the horns and bones of animals. Now they have discovered jewelry from human teeth, which, apparently, were worn as pendants.

In total, researchers found three human teeth dated 6300–6700 BC. e. Two of them were recovered from the skeletonized remains of an adult in the ruins of a house, and one more in a grave. Holes were carefully drilled in each tooth, traces of ornaments were preserved on the surface. Two teeth show signs of wear – obviously, they have been used as pendants for a long time.

The artifacts found give a new understanding of the funerary customs and the symbolic importance of using parts of the human body during the Neolithic Middle East.
According to scientists, teeth were rarely used for decorative purposes. Probably, such jewelry was of particular value.