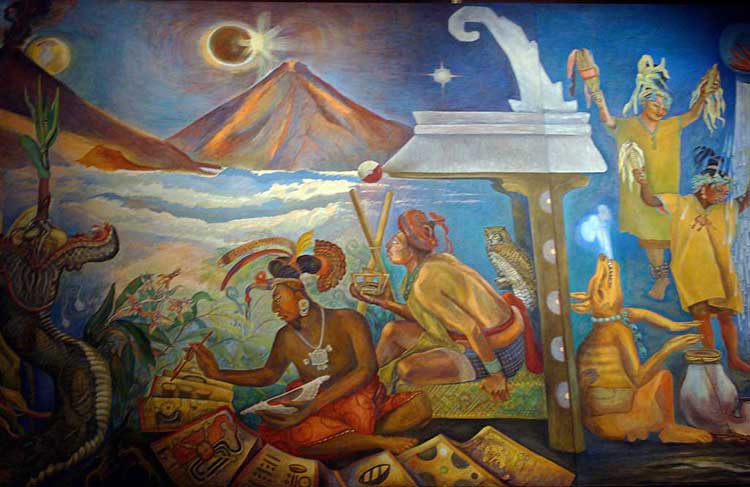 Among the Planets, Venus Held Particular Importance. The ancient Maya were avid astronomers, recording and interpreting every aspect of the sky. They believed that the will and actions of the gods could be read in the stars, moon, and planets, so they dedicated time to doing so, and many of their most important buildings were built with astronomy in mind. The sun, moon, and planets—Venus, in particular—were studied by the Maya.

The heyday of Maya astronomy was in the 8th century CE, and Maya daykeepers published astronomical tables tracking the movements of celestial bodies on the walls of a special structure at Xultun, Guatemala in the early 9th century. The tables are also found in the Dresden Codex, a bark-paper book written about the 15th century CE. Although the Maya calendar was largely based on the ancient Mesoamerican calendar created at least as early as 1500 BCE, Maya calendars were corrected and maintained by specialist astronomical observers. Archaeologist Prudence Rice has argued that the Maya even structured their governments based in part on the requirements of tracking astronomy.

The Maya and the Sky

The Maya believed that the Earth was the center of all things, fixed and immovable. The stars, moons, sun, and planets were gods; their movements were interpreted as gods traveling between the Earth, the underworld, and other celestial destinations. These gods were greatly involved in human affairs, and so their movements were watched closely. Many events in Maya life were planned to coincide with certain celestial moments. For example, a war might be delayed until the gods were in place, or a ruler might ascend to the throne of a Mayan city-state only when a certain planet was visible in the night sky.

The sun was of utmost importance to the ancient Maya. The Mayan sun god was Kinich Ahau. He was one of the more powerful gods of the Mayan pantheon, considered an aspect of Itzamna, one of the Mayan creator gods. Kinich Ahau would shine in the sky all day before transforming himself into a jaguar at night to pass through Xibalba, the Mayan underworld. In a story in the Quiche Maya council book called the Popol Vuh, the hero twins Hunaphu and Xbalanque transform themselves into the sun and the moon.

Some Mayan dynasties claimed to be descended from the sun. The Maya were expert at predicting solar phenomena such as eclipses, solstices, and equinoxes, as well as determining when the sun reached its apex.

The Moon in Maya Mythology

The moon was nearly as important as the sun to the ancient Maya. Mayan astronomers analyzed and predicted the moon’s movements with great accuracy. As with the sun and planets, Mayan dynasties often claimed to be descended from the moon. Mayan mythology generally associated the moon with a maiden, an old woman, and/or a rabbit.

The primary Maya moon goddess was Ix Chel, a powerful goddess who battled with the sun and made him descend into the underworld every night. Although she was a fearsome goddess, she was also the patroness of childbirth and fertility. Ix Ch’up was another moon goddess described in some of the codices; she was young and beautiful and may have been Ix Chel in her youth or in another form. A lunar observatory on the island of Cozumel appears to mark the occurrence of the lunar standstill, the varying movement of the moon through the skies.

Venus and the Planets

The Maya were aware of the planets in the solar system—Venus, Mars, Saturn, and Jupiter—and tracked their movements. The most important planet by far to the Maya was Venus, which they associated with war. Battles and wars would be arranged to coincide with the movements of Venus, and captured warriors and leaders would likewise be sacrificed according to the position of Venus in the night sky. The Maya painstakingly recorded the movements of Venus and determined that its year, relative to Earth, not the sun, was 584 days long, closely approximating the 583.92 days that modern science has determined.

The Maya and the Stars

Like the planets, the stars move across the heavens, but unlike the planets, they stay in position relative to one another. To the Maya, the stars were less important to their mythos than the sun, moon, Venus and other planets. However, the stars shift seasonally and were used by Mayan astronomers to predict when the seasons would come and go, which was critical for agricultural planning. For example, the rise of the Pleiades in the night sky occurs at about the same time that the rains come to the Mayan regions of Central America and southern Mexico. The stars, therefore, were of more practical use than many other aspects of Mayan astronomy.

Many important Mayan buildings, such as temples, pyramids, palaces, observatories, and ball courts, were laid out in accordance with astronomy. Temples and pyramids, in particular, were designed in such a way that the sun, moon, stars, and planets would be visible from the top or through certain windows at important times of the year. One example is the observatory at Xochicalco, which, although not considered an exclusively Mayan city, certainly had Mayan influence. The observatory is an underground chamber with a hole in the ceiling. The sun shines through this hole for most of the summer but is directly overhead on May 15 and July 29. On these days the sun would directly illuminate an illustration of the sun on the floor, and these days were held importance for Mayan priests. Other possible observatories have been identified at the archaeological sites of Edzna and Chichen Itza.

Mayan Astronomy and the Calendar

The Mayan calendar was linked to astronomy. The Maya basically used two calendars: the Calendar Round and the Long Count. The Mayan Long Count calendar was divided into different units of time that used the Haab, or solar year (365 days), as a base. The Calendar Round consisted of two separate calendars; the first was the 365-day solar year, the second was the 260-day Tzolkin cycle. These cycles align every 52 years.